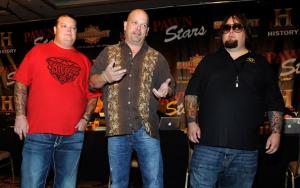 Charlene Harrison was born on June 15, 1986, in Las Vegas, Nevada. Charlene is known for being the ex-wife of Corey Harrison who is one of the stars on the History Channel program, Pawn Stars.

Charlene and Cory were high school sweethearts who were married for several years, until their divorce in 2015. Her famous ex-husband Corey Harrison is a businessman and a reality television star.

Charlene’s ex-husband, Corey Harrison was born on April 27, 1983 in Las Vegas, Nevada to his father Richard Kevin Harrison, nicknamed, “The Spotter“ and his mother Kim Harrison. He is a full-time cast member on the television series Pawn Stars, which is both a documentary and reality TV program that follows his work and work of his father, Richard “Rick” Harrison, grandfather, Richard Benjamin Harrison. The other employees at the World Famous Gold & Silver Pawn Shop located in Las Vegas. Nevada are also featured on the program. Cory Harrison, who is known by the nickname "Big Hoss", began working at the shop at the age of nine.

Corey Harrison’s parents got a divorce when he was only two years old.  Harrison has two half-brothers, Jake Harrison and Adam Harrison and a half-sister, Sarina Harrison. His father co-owns World Famous Gold & Silver Pawn shop together with Corey's grandfather. Corey acquired a net worth of $2,500,000 million from the Pawn Stars series and also from his normal salary working at the pawnshop. According, to Corey's father, their family is related to the former U.S. President William Henry Harrison.

Charlene Harrison attended both elementary and high school in Las Vegas. Her biography states that she never went to college, just like ex-husband Corey Harrison did not. It is speculated that their high school love distracted them and prevented them from continuing their education.

Like Charlene, Corey also attended both his elementary and high school in Las Vegas. He was never interested in college since he showed interest in working at his father’s and grandfather's pawn shop for the rest of his life. He had been working there since he was nine years old and did not want to leave his family to head off to college.

It seems that college education is not in his blood, as his grandfather also did not attend college, and his father was a high school dropout. His lack of college education has not appeared to affect his financial success in life, as the family’s Pawn Shop has earned millions for the family through their reality TV program.

Unlike her ex-husband, Corey, Charlene Harrison is not a TV celebrity. She had no desire to appear on TV. She had no interest in becoming a public figure. Her most notable feature when it comes to fame is just being married to Corey. She worked for some time at the World Famous Gold & Silver Pawn Shop in Las Vegas while she was in a relationship with Corey. While working there, she did not want to become a cast member on the TV show. She was fine with working behind the scenes and out of view.

Charlene has an online store that she promotes on her Twitter and Instagram accounts called Sweet Tempered. In here store she sells homemade accessories like checkbook covers, calendars, aprons, hair accessories, baby items, and bags among other items. Her experience at the pawn shop gave her an idea of what items people are drawn to.

FAQ: What is Charlene Harrison networth in 2020?