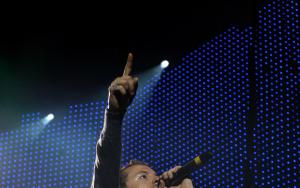 Chester Charles Bennington was the awesome lead vocalist of the world famous rock band Linkin Park. His vocals on Linkin Park’s music albums have mesmerized rock enthusiasts for more than a decade. He was also associated with the bands Stone Temple Pilots (2013-2015) and Dead By Sunrise. Bennington also made appearances in movies like ""Saw VI"  and "Crank: High Voltage". He had a home in Arizona, where he lived with his family when not on musical tours.

He was a drug addict, having been addicted to both cocaine and methamphetamine for a long time. He died on July 20, 2017, in Palos Verdes Estates, California, by hanging himself. He was 41 years old. Early Years Bennington was born on March 20, 1976 in Phoenix, Arizona. His parents both worked long hours outside of the home. His father was a policeman who often worked double shifts, and his mother was a nurse. He has gone on record and said in various interviews that a close family friend had sexually abused him as a child. He was also bullied while attending high school, because he was skinny and looked different than his peers. Bennington’s parent divorced when he was 11 years old, and he went to live with his father. This was when he started abusing a number of drugs, including marijuana, alcohol, cocaine, and methamphetamine.

At 17, he moved in with his mother, who restricted him from going out because of his drug use. He worked at Burger King before become a musician. He first became interested in music during his younger years. He said music helped him heal from the hurtful experiences and abuses he had endured. Music Bennington started his career in a band called Sean Dowdell and His Friends around 1993. From there, he and Sean formed a new band called Grey Daze. The band released three albums during the years 1993-1997. Bennington left the band in 1998.

He floated around for a while, unable to find a band until he auditioned for Xero, which would later become Linkin Park. Linkin Park released their first album, Hybrid Theory, in 2000. Bennington was the lead vocalist, but sometimes shared the role with another band member, Mike Shinoda, whom he also wrote songs with. The album was a huge hit, earning Diamond and multi-Platinum status in certain countries. They continued to have great success over the years, selling over 70 million records worldwide, and winning two Grammy Awards. They were named the greatest artists of the 2000’s by a VH1 poll, and ranked #19 on a Billboard magazine’s Best Artists of the Decade list. Relationships/Personal Life Bennington had a boy named Jaime with Elka Brand in 1996, and also adopted her son Isaiah years later, in 2006.

FAQ: How old is Chester Bennington?