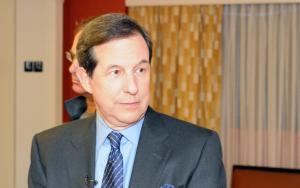 Chris Wallace is known as an American television anchor. He is most famous for working on Fox.

Chris Wallace was born on October 12, 1947. His father Mike Wallace was a reporter. Having his father as a role model was invaluable to his development. When he was amazed by the reporter on screen, he didn’t have to look very far for insight. He was able to learn about the behind the scenes production of news media from his father. It was fun for him to learn about what goes on to make a news program. For him, it was like seeing the tricks that the magician does. When his father would teach him about the craft of reporting, Chris would get even more excited and wanted to follow in the footsteps of his father.

Chris’ mother, Norma Kaphan was a homemaker. The agreement between the parents was that Norma was to take care of Chris while his father was away doing his reporting job. The reporting job required a lot of travel and hours away from home. Growing up as a young boy in Illinois, Chris needed to have his mother raise him while his father was busy with work. The agreement between the two was not enough as they separated with each other one year after the birth of Chris. They got a divorce because Normal realized that she wasn’t ready for the lifestyle that she was presented with. She wanted her husband to be around to raise the children with her. She didn’t want to live a lifestyle where she was constantly left alone. Later his mother married another man named Bill and he lived with his stepfather. Chris’s stepfather also helped him understand the world of journalism and later provided him with the opportunity to work as a journalist.

Chris Wallace married Elizabeth Farrell in 1973. The couple are parents of Catherine, Margaret, Peter, and Andrew. After splitting with Elizabeth, Chris went on to marry another woman named Lorraine Smothers in 1997. It is not known whether Chris had an affair with Lorraine before their marriage or whether she was his girlfriend. Lorraine has two kids from her a previous marriage with Mr. Smothers, a stand-up comedian.

In an interview Fatherly, Chris shared some insight on how life is raising his children, “I don’t have any cute nicknames for my children. I’m sure over the years I have called them all kinds of things but for the most part, I stick to their names. Most of them call me dad but Megan, my oldest daughter, calls me Bom because that is what her kids call me. One of them lives in Washington so I see him at least once a week. Three of them live in New York so I probably see them around once a month. One is in Atlanta and I probably see her a little less than once a month. And finally, one in Mexico City, who I see three to four times a year. If I were to describe myself as a father in three words, it would be attentive, caring, and constructively-critical."

FAQ: How old is Chris Wallace?

FAQ: What is Chris Wallace networth in 2020?