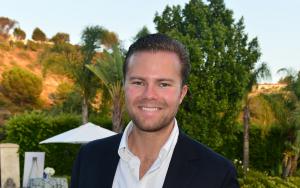 Cody Gifford founded the Gifford Media Group. He has marketed, developed, and executive-produced content for some of the world's most renowned companies, including HBO Films, Warner Bros. Television, MGM, and The Hallmark Channel as a film, television, and new media producer. He's also a professional screenwriter whose work has been featured on The Black List and is represented by the Agency for the Performing Arts in Beverly Hills.

Cody Gifford was born in the United States on March 22, 1990, in Greenwich, Connecticut. Cody Newton Gifford is his given name. Frank Gifford (father) and Kathie Lee Gifford (mother) had him as the eldest son. His father was a former professional American football player and actor who was inducted into the Pro Football Hall of Fame in 1977, and his mother is an American actress and talk show host who was best known for hosting "Live! with Regis and Kathie Lee" from 1985 to 2000.

Frank, his father, died of natural causes on August 9, 2015, at 84. Cassidy Erin Gifford, his younger sister, is his other sibling. Cassidy is also an actress from the United States. He has three older siblings, Jeff, Kyle, and Victoria, from his father's previous marriages.

He was born and reared in Greenwich, Connecticut. He and his parents appeared on many TV shows when he was a child. He was also a football fan, and he used to go to football practice with his father.

Cody Gifford began his acting career in 2010 by working as a script reader for Ridley Scott's Scott Free Productions. After that, he worked for Twentieth Century Fox as a writer's assistant. He and his sister, Cassidy, also appeared on his mother's final day on the live talk show "Live! with Regis and Kathie Lee." Like his mother and father, he aspired to be an actor. Along with his mother, he made his first appearance in the film "Model Behaviour." However, after appearing in his first film, he decided to work behind the scenes rather than in front of the camera in the film industry.

Cody then went on to start the "Gifford Media Group," his production firm.

Gifford Media Group is a production business that has worked on films for HBO, Warner Bros., and The Hallmark Channel. He also works as a media consultant and is a member of the Leadership Circle at USC's School of Cinematic Arts. He is also a professional screenwriter who the Beverly Hills-based Agency represents for the Performing Arts. The Black List has featured his work as a screenwriter. He and his family appeared on the television show "Celebrity Family Feud" on September 25, 2020.

Cody Gifford is a husband and father. Erika Brown, his long-time girlfriend, is his wife. Brown is a well-known American actress best remembered for her part in the film "The Secret Life of Boys." They started dating in 2013 and got engaged in May 2020. The pair married in a covert private ceremony on September 5, 2020, following COVID-19 norms and regulations. He is currently residing in Greenwich with his family, where he is pleased.

Cassidy, his sister, married her long-term partner, Ben Wierda, in June 2020. Kathie Lee Gifford, his mother, is overjoyed to see both of her children marrying and settling down with their loved ones. Kathie shared photos from her daughter Cassidy's June wedding and her son Cody's September wedding on Instagram. Kathie is also satisfied with the decisions made by her children.

Cody Gifford has amassed a sizable fortune from his work as a television producer. As of 2020, his net worth is expected to be $4 million. His net worth includes all of his assets as well as his current earnings. With his money, he is currently living a lavish lifestyle.