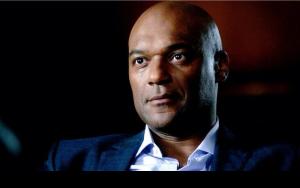 Colin Salmon is a British actor who was born on December 6, 1962, in Bethnal Green, London, England. He was born to Sylvia Ivy Brudenell Salmon and grew up in Luton where he attended Ramridge Primary School. Salmon went on to attend Ashcroft High School where he met three friends and formed a band together. The group released a 7-inch EP cassette and performed at local shows in the late 1970s. Salmon made his acting debut as Sgt. Robert Oswald in the 1982 mini-series "Prime Suspect 2". His most notable roles include playing Charles Robinson in the James Bond films "Tomorrow Never Dies", "The World Is Not Enough", and "Die Another Day". Salmon also appeared in the ITV television series "Bad Girls" in 2006. Other notable films Salmon is known for include "Resident Evil" and "Alien vs. Predator".

In both films, Salmon's characters meet grotesque ends when they are diced into cubes. He returned to the Resident Evil franchise in 2012 alongside Michaelle Rodriquez in "Resident Evil: Retribution". Salmon is the chairman of governors at St Anne's Nursery and is an ambassador for The Prince's Trust. Salmon married Fiona Hawthorne in 1998 and they had four children together named Sasha, Rudi, Eden, and Ben.

FAQ: How old is Colin Salmon?