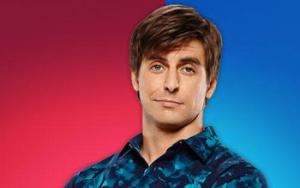 Cooper Barnes was born on April15, 1979, in Sheffield, United Kingdom. Even so, he was raised in a small suburbia in Michigan, United States. He attended the Northville High School, from where he graduated in 1997.

Cooper Barnes is known for his acting skill but he is also a producer and a writer. In 2001 he did his debut in Digging with Earnest. He was also member of the cast in Kickin’ It, Suburgatory, Jessie, Cold Case and Switched at Birth. As movie performance he is known for the parts in Victim, H-sensor, Sweet Judy Blue Eyes, I’m That Girl and The Perfect Host.

He also played the part of Deputy Sam Byron in Defending Santa and he did two character’s voices in Escape from the Earth World. Due to his career, it is believed to have a net worth of $10 million, although an official number was not released to the press.

Moreover, Cooper Barnes is known for his role as Captain Man from Nickelodeon’s show Henry Danger. He was elected for his part due to his physique- at the age of 36 he is 5 feet 9 inches in height which is perfect for a superhero.

Cooper and his wife are currently expecting their first child. The announce was made to some of the family’s friends during the Christmas holiday. Cooper, who is extremely popular among children, is very excited for the new member of the family. The baby should be born in July and as far as until now the pregnancy goes well, and the baby is healthy.

The couple imagined the birth differently – Cooper wants it to be done in an hospital, while his wife would prefer to give birth at home, in the most natural way, but with the help of mid wife’s and medical personnel.

Cooper’s relationship with his wife dated for three years before the wedding. He confessed that his wife was very supportive regarding his career and she always wanted more and more for him. As for her, she tries her best to avoid the spotlight even though is married to a famous actor.

Cooper has a lot of fans, especially children. Due to his role as Captain Man, many children want to become superheroes. He admits that it is difficult to be a superhero for children because sometimes they do not know the difference between fantasy and reality so they look up to him. It is his duty to maintain this good image for children who are watching the show and believe in him. He keeps in touch with his fans through social media like Facebook, Twitter and Instagram.

Currently he is involved in many projects and he is very excited to present them to the audience. He said that 2016 is by far one of the busiest years he ever had in his career as well as in his personal life. He also stated that after his baby’s birth he will be more focused on his family. He strongly desires to participate in raising his little baby and help his wife with whatever she needs. This attitude is well seen among his fans, mostly women, who think that more men should have this kind of thinking.

FAQ: What is Cooper Barnes networth in 2020?