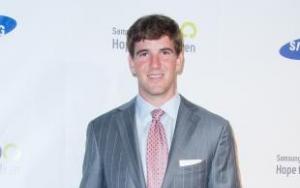 Abby Mcgrew was born in 1984 in Nashville, Tennessee. There are little things known about her, because she successfully avoided the spotlight. She studied fashion in New York City, and in 2007 quarterback Eli Manning proposed to her. This is one of the reasons she became famous. Abby started to date Eli since they were both in college, at the University of Mississippi. In 2007 Eli Manning proposed to Abby and they got married on April 19, 2008. The wedding took place in a private ceremony in San José del Cabo, Mexico. As a result of their marriage, they have three children. Their first baby was born on March 26, 2011. It was a daughter, and they named her Ava Frances. In June 17, 2013 their second child was born, Lucy Thomas. Caroline Olivia, their third daughter was born on 29 January, 2015.

During the season, they live in Hoboken, New Jersey.

The couple is very happy together and every time they speak about their relationship you can see the love in their eyes. They say that they first met at Ole Miss. She confessed that during their relationship she find it hard to stay away from the spotlight. Abby knows that all her fame is because of her relationship with Eli Manning. Even so, she tries hard to stay under the radar and she can rarely be seen during games. She says that her time is divided between her charity actions and raising her three daughters. Abby also said that she prefers that only her husband appear in the press, for his great performances, instead of her and some dirt that media found on her.

Fans were very surprised when the couple’s third child was born. After they confirmed the pregnancy, a few hours later the little baby was born. This way of announcing their third child was unique and it was their way of saying that their private life should not be the media’s concern.

The proposal Eli did to her wife was simple but romantic. Back in 2007, Eli went on and designed a ring for her at Adler’s. Everybody thought that he will propose on their trip to Nashville, but the event came earlier. Only that Eli didn’t had too much patience so, on one Tuesday evening, when they were spending time together, Eli dropped on one knee and proposed. The answer was, of course, yes as them two got married a year later.

Abby and Eli are both involved in charity programs. Although her net worth is unknown, the couple raised approximately $3 million in order to build a clinic in Blair E. Batson Hospital for Children. The Eli Manning Children’s clinic is a 15.600 square-feet space designed to provide health care for children in areas of orthopedics, cardiology and endocrinology.

She is also part of New York’s St. Vincent’s Hospital charity organization. Due to her donations and activity as fundraiser, the hospital could build a new holistic birth center.

Abby keeps herself busy, and remained focused on her career. She used to work for designer Pamela Roland as an account executive for evening wear and wedding dresses. Currently she does not possess a wiki page.