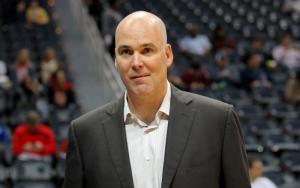 Danny Ferry is a retired professional basketball player. After his retirement, Ferry served as the general manager for the Atlanta Hawks and Cleveland Clippers. He also served as the vice president of basketball operations for the San Antonio Spurs of NBA fame. During his high school and college years, Ferry was considered as one of the best rising basketball players in the United States. He has many school records to his name. Ferry’s net worth is estimated to be $17 million.

Danny Ferry was born on 17th October 1966 in Hyattsville, Maryland. His birth name is Daniel John Willard Ferry. Ferry was inspired by his father, Bob ferry who was also a NBA player to take up basketball as his profession. He attended Dematha Catholic high school where he excelled at basketball. During his high school years, he went on to earn the name as one of the country’s top high school basketball players. Ferry was also named as the player of the year in 1985.

Danny Ferry was one of the most sought after high school players by the universities. He enrolled at the Duke University and earned a degree in political science. He played basketball for 4 years at the Duke University. He was selected twice to the first team all-America. He is also the recipient of Naismith Award. Ferry was included in the Duke’s hall of fame in 2004.

Ferry was the second overall pick in the first round of the 1989 NBA draft for the Los Angeles Clippers. Ferry was not interested in playing for the Clippers and instead chose Il Messaggero club of the Italian League. He performed well in the league with an average of 23 points.

Ferry signed a contract with the San Antonio Spurs in 2010. Ferry ended his career on high note with Spurs winning the NBA championship in 2003. From here, he embarked on another journey as the manager for various teams.

Shortly after his retirement, Ferry worked as the vice president of basketball operations for the San Antonio Spurs from 2003 to 2005. His biggest achievements in the management career were with the Cleveland Cavaliers. In 2005, Ferry signed a five year contract with the Cavaliers for $10 million as the general manager. Ferry and the management were successful in acquiring biggest names in the NBA history. The Cavaliers team flourished with the likes of superstar LeBron James and Shaquille O'Neal. The Cavaliers entered the finals of the NBA league in 2009-2010 seasons. It was the first and only NBA finals of the Cavaliers club. On June 4th 2010, Ferry parted ways with the Cavaliers.

Ferry is married to Tiffany Ferry. Ferry is a devoted father and a husband. He and his wife have 4 beautiful daughters and a son. IN 2014 Ferry spurred controversy by reading an offensive statement out loud from the scouting report. Ferry is also a member of non-profit organization- Playing for Peace which uses basketball to unite and educate children from all over the world.

FAQ: How old is Danny Ferry?