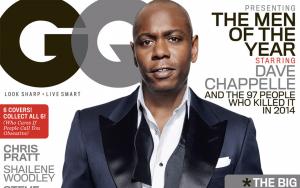 Dave Chappelle was born to professor parents William David Chappelle III and Yvonne in Washington DC on 24 august 1973. His father taught at Antioch College, Ohio while his mother taught at Prince George community college. His parents, however, separated when he was a kid and his father moved to Ohio. He spent his most of the childhood at his mother's house and visited his father in the summer breaks.

Dave completed his graduation in Theater Arts from the Duke Ellington School of Arts in 1991 and later went to New york city to fulfill his childhood dream of becoming a comedian. His first few stage performances were not as good as he expected to be. He was actually booed off stage in the first stage performance that he gave at Apollo theater. This, however, did not break his courage and he later started performing in parks and public places to gain experience and confidence.

His shows started becoming great hits and so at an age of 19 he got a role of Ahchoo in the Robin Hood Men in Tights. The same year he declined the chance of playing Bubba Blue in Forrest Gump thinking that the movie won't be a success, later regretting the decision because that movie went on to become one of the best movies of all time.

He started gaining fame very quickly at an age of 20 years due to his performances in New York and Chicago and his light-hearted nature. In 1995 he appeared as a guest on the very popular TV show Home Improvement. His performance in that episode earned him his first tv series called Buddies. It, however, did not turn out as expected and after falling out with the directors he was fired.

In 1996 he appeared in the movie Nutty Professor along with Eddie Murphy who was a great influence to Dave. The movie went on to become a very big hit grossing around $ 129 million. A year later he appeared in the Con Air playing a minor role. He appeared in You've Got Mail and Blue Streak before the turn of the century.

His career took a big turn however in 2003 when he got his own comedy show on Comedy Central. This show was fittingly called the Chappelle's show. The show went on to become a huge success and it is reported that Chappell was given a contract of $55 million for working in the show. In season 3 he had a fallout with the production team and so he left the show and went on a tour to South Africa leaving the media stunned.

In December 2007 Chappell made a stand-up endurance record with a time of 6 hours and 11 minutes. Chappelle currently appears in shows without prior announcement and continues to do shows worldwide. Prince selected Chappelle's impersonation of Prince as the cover art of his album Breakfast Can Wait.

Chappell currently lives with his wife Elaine Mendoza Erfe and 3 children in Ohio. His net worth is estimated to be around $16 million. His biography can be read on Wikipedia as well as on IMDB.

FAQ: How old is Dave Chappelle?

FAQ: What is Dave Chappelle networth in 2020?