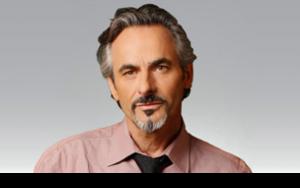 David Feherty is known as a former professional golf player and current sports analyst. He is famous for his work for CBS Sports and the Golf Channel.

David Feherty was born in 1958, in Northern Ireland. He talked a lot about his mother, Vi who sometimes visits him from Ireland. She loves shooting and her hobby is hunting wild hogs. David takes her to a nearby shooting range when she comes over. He also made her a customized rifle.

David's first spouse was a South African beauty queen named Caroline and they gave birth to two sons. They ended up getting divorced in 1995. He got custody of the kids, but the visitation would allow them to see each other.

After the divorce, he said he was so broken that he used to run 15 miles a day to keep his mind calm because of the anxiety it caused him. He said he was very sad when one of his friends fixed him up on a blind date with a woman named Anita. He said he liked her at first sight but he actually drank a lot that night which didn’t go over well with Anita. She left within 30 minutes after realizing how drunk he was. When he asked her on a second date, she agreed on the condition that he had to be sober. Anita soon became his new girlfriend. They got married in 1996.

David Feherty became a professional golfer in 1976. He spent a year playing on the PGA Tour. In 1986, he won with a birdie in Italian Open and Scottish Open. He also won two Irish PGA Championships and a South African Championship. In 1990, he won the Alfred Dunhill Cup. After 2006, his career was masked by alcoholism and his old age had caught up with him. He quit his pro golfer career and joined broadcasting, helping out with some of the biggest networks in professional golf like CBS. He also worked with Golf Magazine and the New York Times

In 2005, he starred in the TV series comedy called Yes, Dear, making it his first try at a comedy series.

In 2010, he became a naturalized citizen of America. In 2012, he was awarded the Outstanding Civilian Service Award for his work with Troops First Foundation. In 2011, he joined the Golf Channel and hosted a talk show called Feherty on Golf. He also worked as an announcer for an EA Sports golf video game. He has starred in advertisements for Cobra Golf Company.

In 2015, he left CBS and joined NBC Sports. He also became a full-time analyst for the Golf Channel.

After the end of his golf career, he replaced his athletic void with cycling but got into three accidents. One of them was major as he was run over by a tractor, crushing his left arm, breaking a few ribs and he also punctured a lung. He could not straighten his left arm until he fully recovered.

FAQ: How old is David Feherty?

FAQ: What is David Feherty networth in 2020?