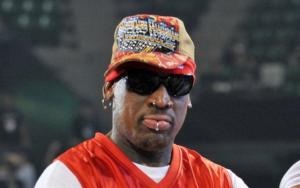 Dennis Rodman was born in the year 1961 and he is a retired American Professional basketball player and played for different team such as Dallas Mavericks, Los Angeles Lakers, Chicago Bulls, San Antonio Spurs and Detroit Pistons. He was given the nickname of The Worm and he was known because of his rebounding and defensive abilities.

Rodman played in small forward position when he was still young and afterwards he played in power forward. He got the award of being NBA All Defensive First Team Honors for many times and he won the NBA Defensive Player of the Year two times. He was also leading the rebounds per game for the record of the seven consecutive years and he work the NBA championship.  NBA.com has written about his biography and they concluded that he is the best when it comes to the rebound forward in the history of NBA.  He retired in 2011 and he was inducted in the Naismith Memorial Basketball Hall of Fame in the same year.

Dennis Rodman was not happy during his childhood and he was introverted and shy for some years.  After trying the suicide in the year 1993, he became a bad boy and he became notorious for many controversial antics. He dyed her hair in different artificial colors and had many tattoos and piercings. He sometime disrupted the games when he clashed with the opposite teams or officials. One day, he wore a wedding dress when he wanted to promote his autobiography called Bad as I Wanna Be.  He had a high profile affair together with the singer Madonna and he got married for some time to Carmen Electra.  Rodman also became known by visiting North Korea and he became a friend to its leader Kim Jung-un.

Besides basketball, he is also an actor a retired professional wrestler who was wrestling part-time.  He was a member of The nWo and he was fighting together with Hulk Hogan on Bash at The Beach.  He had his own show on TV called The Rodman World Tour and he had lead roles in two films Simon Sez and Double Team. He got Triple Razzie Award for one of his film. He was a winner of celebrity mole and of Celebrity Championship Wrestling. Dennis Rodman was born in New Jersey and his father was a member of Air Force and fought in Vietnam War. To his father’s side, he has over 26 siblings.  His two sisters were also basket players and he did not see his father for up to 30 years. Dennis Rodman first wedding was to Annie Bakes and they have a daughter together called Alexis. They divorced and he married Carmen Electra. He got married to his third wife, Michelle Moyer and they had a daughter and a son. However, they also divorced. His net worth is in negative one million.

FAQ: How old is Dennis Rodman?

FAQ: What is Dennis Rodman networth in 2020?