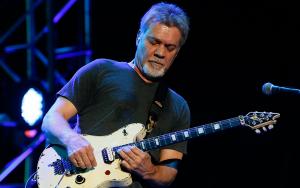 Eddie Van Halen is known as a Dutch-American musician, lyricist, and producer. He is most famous for being the primary songwriter and founder of the well-known rock band, Van Halen.

Edward Lodewijk Van Halen was born on January 26, 1955 in Nijmegen, Netherlands. Edward Lodewijk van Halen is the child of a Dutch dad, Jan van Halen. His father performed as a clarinetist, saxophonist, and pianist. He had an East Indies born mother named Eugenia van Halen from Rangkasbitung, Banten. Van Halen's middle name, "Lodewijk", was given him to pay tribute to composer, Ludwig van Beethoven. He proceeded with this tradition by naming his child Wolfgang after composer, Wolfgang Amadeus Mozart.

On August 29, 1980, Eddie met actress Valerie Bertinelli at a Van Halen show in Shreveport, Louisiana. They fell in love and got married in California on April 11, 1981.