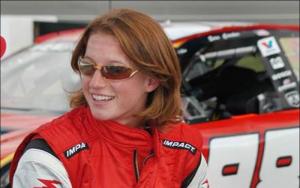 Erin Crocker is a beautiful woman who in 2015 in 34 years old. She is known as an American race driver, who has competed in several championship races. A young and beautiful woman, she has been famous for marrying her former boss after a series of romantic affairs. A competitor at NASCAR and ARCA, she has won many titles too. Her interest in racing came from an early age, and she says that she always wanted to be a driver. As she usually sat in the front seat of her father’s car, she always wanted to take control of the vehicle. That interest dragged her to quarter midget’s race at the age of 7 for the first time. Since then, she has always been racing and made a life and a career out of it.

Born on the 23rd of March, 1981 in Wilbraham, Massachusetts, U.S.A, she was raised in a middle class family. Born as the only daughter to a working class couple, she was raised by her father after her mother left the family and went away. She recalls very faint memories about her mum and says that her father has been the world to her. Supporting her daughter’s every possible demand; he walked her to the first race of her life at the age of 7; when she competed in Custom Quarter Midget Club in Connecticut. With good control over herself and the wheels, she was named as the Most Improved Novice. That became a motivation for Erin, who then went on to win three successive Northeast Regional Quarter Midgets Championships between 1993 and 1996. With a side by side high school duty, she also played in other sports like Soccer, Basketball and Lacrosse.

In 1997, she became the youngest as well as the first female driver to take part in the Mini Sprints at Whip City Speedway, which she won. With more confidence, she participated in the 1200 cc Central New York Mini Sprint Association (CNYMS), where she was named the Rookie of the Year.  As a professional racer, she debuted in the World of Outlaws in New York, while studying at the Rensselaer Polytechnic Institute. With her Bachelor’s degree in industrial and management engineering, she graduated in 2003 and by then had already signed up for Woodring Racing to drive a 360 sprint car. Winning more than a dozen of awards in big time and small races, her name was up for the National Sprint Car Hall of Fame Outstanding Newcomer Award.

She has been a very celebrated person across the world and not just in United States. With her passion and hard work towards her racing dream, she moved up so fast that she didn’t even have time to celebrate her success. Looking back now, she has won it all; name, fame and money as well as a family that she loves very much. She got married to her former owner Ray Evernham after dating for many years in 2009. The couple, who are still together after 6 years, recently had a daughter in July, 2015 named Cate Susan Evernham.

FAQ: How old is Erin Crocker?