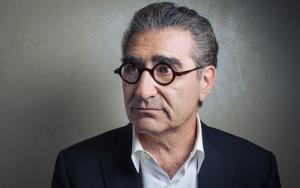 Eugene Levy was born on 17th December 1946. Eugene Levy is a Canadian actor, musician, director, comedian, writer, and producer. He was born to a Jewish family in Hamilton, Ontario, Canada. His father was a foreman in an automobile plant and his mother was a housewife. He was sent to Westdale Secondary School and later he went to McMaster University. Howard Cosell, Tony Dow, Lorne Greene, Ernest Borgnine are some of the celebrities whom Levy used to impersonate. Eugene Levy was found active in the industry from the year 1969 till present times.

He did the role of Noah Levenstein in all the eight parts of the American Pie films. He is the only actor who has appeared in all the parts of this film. Eugene Levy is often seen playing unconventional figures, nerdy roles in his films. Levy derives the humor from his way of dealing with sticky situations and his extravagant explanations of matters as well. Levy had received Canada’s highest honour in the performing arts which is the Governor General’s Performing Arts Award in the year 2008. On 30th June 2011 he was appointed to the Order Of Canada. It has been estimated that the net worth of Eugene Levy is $15 million.

A look into Levy’s Personal Life

Eugene Levy got married in the year 1917 to Deborah Divine. Danial and Sarah are his two children with his wife, Deborah. The couple had some marital problem after they move to Los Angeles. The couple stayed married for over 32 years. Levy is an advocate for autism treatment, which is a neurodevelopmental disorder that is characterized by verbal and nonverbal communication, social interaction and restricted and repetitive behavior. John Candy who was a close friend of Levy died of a heart attack in the year 1994.

Eugene Levy did his first TV Show, SCTV, in the year 1976 next he did his role as Devid Grodin in the shoe titled Partners ‘N’ Love in the year 1992 next in Greg the Bunny in 2002 as Gil Bender the other two TV shows where he played the role of McKenzie and Johny Rose in Package Deal and Schitt’s Creek respectively. His popular movies are Foxy Lady, Cannibal Girls, Running, Deadly Companion, Nothing Personal, Heavy Metal, Going Berserk, Splash, Club Paradise, Stay Tuned, American Pie series, The Man, Gooby, Taking Woodstock etc. The last movie done in the year 2016 was Finding Dory playing the role of Dory's father, Voi. Levy was the creator of the TV serial, Maniac Mansion.

In the year 1973, he got Medalla Sitges en Plata de Ley for best actor for the Cannibal Girls in the Catalonian International Film Festival. He also got the Earle Grey Award in the Gemini Awards in the year 1995. He also got nominated for Worst Supporting Actor in Razzie Awards for the films like The Man, Cheaper by the Dozen 2.

The Recognition of Eugene Levy

In the year 2003 Levy was awarded The Grammy for the Best Song Written for a film of Motion Picture, A Mighty Wind, for its title song. Levy got the award with his co-mates in that title song, Michel McKean and Christopher Guest.

FAQ: How old is Eugene Levy?