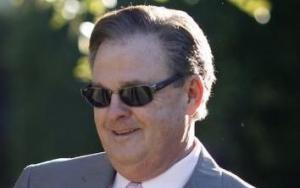 Frank Fiorina was born in Pittsburgh, Pennsylvania where he spent most of his childhood and early life. He is mostly known for being Carly Fiorina’s husband. She is a candidate for the 2016 presidential. Frank is a very supportive husband, considering his wife’s rising career and the things they’ve been through. He is always next to her wife as we can see from the photos the media shares.

Frank also had a rising career which is always highlighted by his wife in her speeches. His first job was at his dad’s auto body shop from their city. Afterwards he got a job as a truck driver and then became a technician for AT&T. In the beginning he said that he was making only $99 a week. Through his hard work he climbed up the hierarchy ladder and became vice president at AT&T. When he was young, Frank was a guitarist for a rock band during 1960s and 1970s. The problem was after his children were born because he couldn’t find any more time to spend with the band. He confesses that he was a little bit jealous on his colleagues who continued to play but he does not regret a thing.

Before he was married to Carly he had another wife, Pat Easler Fiorina. They had two daughters, Tracy and Lori Ann. In 1981 Pat started the divorced which was finalized two years later. She gained custody over their two children. Lori Ann died at the age of 34 after a long struggle with drug abuse and alcoholism.

Frank met his currently wife while he was working at AT&T. He was on a higher position than her when they started dating. He remembers that one their third date he told her that one day she will run the company. They married in 1985 at one of Carly’s friend’s house in Maryland. The ceremony was extremely private. There only 6 attendants including the caterer and Frank’s two daughters.

Frank retired from his career at the age of 48. He did so in order to support her wife and his daughters. Even though some of their friends did not agree with his decision he knew that he needed to stand next to his wife. For a period he used to be Carly’s bodyguard. This happened during the time Carly was CEO of Hewlett-Packard. He was also one of her bodyguards during her campaign for the U.S. Senate from 2010. In 2000 Frank obtained a legal permit to carry a gun. He admits that while he was his wife’s bodyguard he carried the gun with him all the time considering that CEOs are often targets of criminals. Both Frank and Carly have a net worth of $59 million.

In 2009 the couple went through a hard time. Lori Ann died and Carly was diagnosed with breast cancer. She performed a double mastectomy, but luckily she fully recovered. Frank supported his wife all through this time. It was a hard year for both Frank and Carly that loved Lori as if she was her own daughter. They stood by each other respecting their wedding vows – to stay strong and besides their partners through sickness and health, through good and bad times.

FAQ: What is Frank Fiorina networth in 2020?