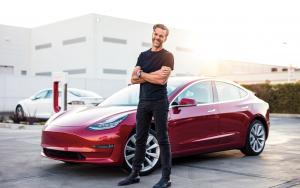 Franz von Holzhausen, born on May 10, 1968, in Simsbury, Connecticut, is an American vehicle designer. He has been the head of design at Tesla since 2008 and has designed the Tesla Model S, Model 3, Model X, Model Y, the second-generation Tesla Roadster, and the Cybertruck.

Holzhausen began his career working for Volkswagen in 1992. He took the project in designing the Microbus and the New Beetle concept, also known as the 'Concept One,' under the design lead J Mays.

After working for eight years at Volkswagen, he moved to General Motors as a design manager in 2000, working on the Saturn Sky and the Pontiac Solstice.
In 2005, Franz Holzhausen took the opportunity to become the chief of design at Mazda, where he oversaw and led the Mazda Kabura concept car, which debuted in the 2006 North American International Auto Show. Another project of his, the 'Mazda Furai concept car,' was unveiled in 2008 at the same Auto Show, both in Detroit.
After a successful period working at Mazda, he went on to work for Tesla in 2008. Ever since he has been a pivotal person responsible for developing Tesla cars, critics and his boss Elon Musk have hugely appreciated his works and designs for Tesla.

When Franz joined Tesla, he found his perfect partner, his life work. In the beginning, the electric car pioneer had outsourced much of the work on Tesla's original Roadster to supercar maker Lotus. Soon, he began taking charge of things and worked in-house building and designing the future of Tesla in Model S sedan— the understated aesthetic has helped define the Tesla experience ever since.

With the expansion of Tesla in its work area and lineup, Von Holzhausen got broader tapestry to work from 2017's affordable $35,000 Model 3 Sedan to the new Roadster, a $200,000 supercar. The Roadster is set to become the fastest production vehicle ever made, with it being engineered to go from 0 to 60 mph in 1.9 seconds.

FAQ: What is Franz von Holzhausen networth in 2020?