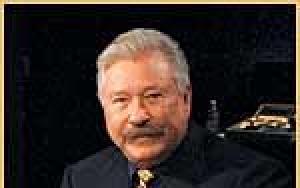 Hal Lindsey is known as an American evangelist and writer. He is most famous for books that claimed the rapture would happen in the 1980s.

Hal Lindsey was born on November 23, 1929 in Houston, Texas. Hal’s parents are Daisy Lee Freeman and Percy Lacy Lindsey. Hal gave his life to Christ in 1955 at the age of 26 after a shocking experience he called “help from an unseen hand.” Before his conversion, Hal didn't consider himself to be a very moral person despite his frequent visits to the church. In his search for Christ, he was baptized on three different occasions at three different churches. After each baptism, he was disappointed by the fact that he still seemed to be the same Hal before getting baptized.

Hal soon forgot about Jesus after his third baptism. However, grace found him again during the Korean War when he got a job in New Orleans at the Coast Guard. One day, Hal decided to sail across the Mississippi River without adequate safety measures on his ship. There was no radar or signal alarm which made it difficult for him to sail across. Hal almost lost his life in an accident with another ship when an unseen force which he later believed to be the hand of God directed him to turn swiftly to a safer direction. This experience got Hal thinking again about the benefit of serving God.

His ordeal made him receptive to a friend’s advice about meeting a pastor who lived at the docks. Even though Reverend Robert Thieme wasn’t within his immediate area, Hal still made efforts to see him. It was after his meeting with the preacher that Hal gave his life completely to God.

This appeared to be the turning point in Hal’s life. Hal soon went to Dallas Theological Seminary to study the existence of God. He graduated with a Master of Theology Degree and specialized in the New Testament. While on campus, he joined other groups to minister the gospel. His experience in school as a preacher was a stepping stone for his call into pastoral work at the Tetelestai Christian Center in Torrance, California.

Hal has been married four different times in his life. After the fifth printing of his 1974 book titled There’s a New World Coming, Hal replaced his first wife’s picture with Jan, his second wife whom he described as his best pal. Jan and Hal gave birth to three girls. The picture and description were removed in the updated edition of the same book in 1984 after their divorce.

In the year 2000, Lindsey’s book titled Planet Earth carried the picture of his third wife named Kim. Kim did not last long even though she was up to 25 years younger than Hal.

Hal soon found the fourth wife at the Tetelestai Christian Center. Contact with her was inevitable as the two frequently met in bible study classes where Jolyn Lindsey actually sat under his tutelage. Updated and revised editions of his old books have his fourth wife’s pictures on them.

People call him the Jeremiah of his generation because of his inspirational biblical prophecies. Hal is one of the richest evangelists of this generation with a net worth of over 42 million US dollars. Much like another mega pastor, Joel Osteen, Hal makes most of his money from his books and sermons. His books are frequently bought by Christians that want the bible translated in modern words. Some followers choose to read the bible and get their own interpretation of what God is trying to say. Others prefer to read books by modern pastors like Hal because the information is more relatable. Hal will even give financial advice in his books as if they were a message from God.

FAQ: How old is Hal Lindsey?