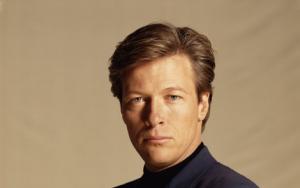 Jack Wagner is a well-known American actor and singer who has appeared on the soap operas General Hospital, Santa Barbara, The Bold and the Beautiful, and Melrose Place.

Wagner was born in the Missouri town of Washington. He was raised as a Catholic and played football and basketball at St. Gertrude's parochial school and St. Francis Borgia Regional High School in his hometown. He spent one year at the University of Missouri, then went to junior college before enrolling in the University of Arizona, where he tried out for the golf team and the drama department. The drama department offered him a full scholarship.

After a few short stints on cable television, Jack landed the role of Frisco Jones on the soap opera General Hospital in 1983. Although Wagner was a talented musician and played the guitar since the age of fourteen, his initial tryouts for the role of Frisco Jones did not include any singing. Wagner ended up auditioning for the role five times, and in his final audition, he performed the Kenny Loggins song "Wait a Little While."

Wagner played a role in 1983-1987, 1989-1991, 1994-95, and again in 2013. Jack played the husband role of a super couple in tandem with the actress Kristina Wagner. In 1985 Wagner was nominated for a Daytime Emmy Award for "Best Younger Actor" for his work on General Hospital. Jack was nominated for a Daytime Emmy Award again in 2005 for "Best Lead Actor" for the soap opera "The Bold and the Beautiful."

Jack got married to Kristina Wagner in 1993. During the marriage, they have filed for divorce twice. They finally got separated in 2006. In 2007, Jack got engaged to Heather Locklear. Wagner said that his affair with Heather was the second priority and his parenting was the foremost priority. Saying that he wanted to concentrate on being a good father, Jack broke his marriage engagement with Heather in 2011. Wagner also has a daughter from a previous relationship, his girlfriend was pregnant and gave birth to a girl, but she gave her up for adoption. Jack tried to track his daughter but was unable. After 23 years of living apart, Kerry, his daughter, was successful in tracking Jack down.

Kristina initiated their marriage separation due to the constant cheating by her husband. The sources close to the couple said that it was a big surprise that Kristina could put up with Jack's philandering ways and all his secret relationships for so many years. Jack knew Kristina when she was married to her first spouse. Sources said that they did not have a close relationship until after Kristina was Robert Malandro's wife. After Kristina's first marriage dissolved, Jack and Kristina began an intimate relationship. Although Wagner was in a relationship with actress Liza Greer at Kristina's divorce, he left Greer to be with Kristina.

FAQ: How old is Jack Wagner?