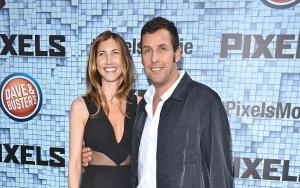 Jackie Sandler is an American model and actress who is well famous for her towering height. Jackie was born as Jacqueline Samantha Titone to the American parents, father Joseph Titone and mother Lila Titone. She was born on 24th September, 1974 in Coral Spring, Florida, United States. She is American national and her ethnicity is white. She belongs to Italian descent and her beauty speaks of her roots. Jackie was born to a very normal middle class family.

This beautiful lady had the passion of modeling since her early age. She started pursuing career in modeling when she was in school. She participated in several national as well as international fashion shows. Her height is the top most reason for being a perfect and popular model. She seemed to be interested in the profession of acting and made her debut in the year 1999. She appeared in Big Daddy and played the role of waitress in that. This was her appearance as a professional actress and largely liked by the viewers. Deuce Bigalow: Male Gigolo was another movie of the actress made her famous and noticeable in the world of entertainment. In that movie she performed the character of Sally. She has done with several movies and according to an estimate more than one dozen movies has been witnessed on her credit. The character Jackie Tardio in the film Grown Ups was one of her memorable role that gave hr rise in her career.

Jackie got married with Adam Sandler on June 22, 2003. This was a new journey of the talented woman. She continued her passion and career of acting even after the marriage. The couple got a baby girl on May 6, 2006 in Los Angeles named Sadie Madison Sandler. On 2nd November 2008 they had their second daughter Sunny Madeline Sandler. Adam Sandler, her husband is a multi talented person who has proved her skills in a number of fields. He is a famous American actor, musician, screenwriter, comedian and film producer.

Jackie has many famous movies on her credit that include: Little Nicky, Duplex, The Benchwarmer, Eight Crazy Nights, 50 First dates, Bedtime Stories, I Now Pronounce You Chunk and Larry, Zookeeper, Paul Blart: Mail Cop and many others. Some of her roles became very popular among the viewers and they loved her acting abilities in those movies; some of these roles include Martha in the movie Hotel Transylvania, Veruca in movie Just Go With It and the role of Jenifer in the film Pixels.

The brilliant actress used to appear in the movies produced by her husband and highly appreciated by her fans. She is leading a very successful happy life with her family and there is no rumor or split or divorce.

Now the beautiful and skilled artist is of 42 years old but still looks gorgeous. She is 5 ft and 9 in. and seems successful in seeking the attention of her lovers and fans. Her estimated net worth is around 5 millions.

FAQ: How old is Jackie Sandler ?