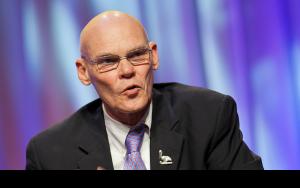 James Carville is known as a political consultant and media personality. He is most famous for being the lead strategist of Bill Clinton's 1992 presidential campaign.

Chester James Carville, Jr. was born on October 25, 1944, in Carville, Louisiana. He was born as the eldest of 8 children to his father, Chester James Carville, and Lucille Normand. The town he was born in has the same name as his last name because his grandfather, Louis Arthur Carville. was a reputed and respected postmaster. As a child, James attended the Ascension Catholic High School in Donaldsonville, Louisiana. After graduating successfully from there, he went to study at Louisiana State University. A law student, he received his Juris Doctor degree, and after graduating, he served in the United States Marine Corps for a couple of years.

James Carville has been a married man for over two decades. He is married to Mary Matalin, who is a Republican consultant. The two of them met during the 1990 presidential campaigns. After being in a loving relationship, they got married in November 1993. They have given birth to two daughters, Matalin Mary Carville and Emerson Normand Carville.

James Carville started his career as a litigator at the Baton Rouge law firm between 1973 and 1979. He went down this path after his time with the Marines was over. He started to gain consulting skills and began to team up with many other journalists and famous figures. Before the presidential election, Clinton defeated George H. W. Bush in 1992 with Carville's help. As a result of his help, he was honored with the Campaign District Manager of the Year award by the American Association of Political Consultants after Clinton came to power. For his importance in that campaign to Clinton, a documentary featuring him named The War Room was released in 1993 and was directed by Chris Hegedus and D. A. Pennebaker. He continued his political work with other campaigns and international icons like Ehud Barak of Israel, Tony Blair of the UK, and Gonzalo Sánchez de Lozada in Bolivia. Throughout his career, he became one of the most influential people in and outside of the USA.

Known as The Ragin' Cajun, Carville developed a career as a political commentator who has been a vital figure in the Democratic Party. As a popular TV show host with CNN, he also ran multiple radio shows and talk shows. He became a professor of political science at Tulane University before leaving in 2018 to teach mass communications at LSU. With a net worth value of about 5 million dollars, he has enjoyed significant fame with many social media fans.

Carville was giving more than 100 lectures each year to diverse audiences, including business organizations, schools and universities, and Democratic Party fundraising events, according to the New York Times in 2004. "No political strategist has built a place as distinctive as his," said Charles Lewis, executive director of the Center for Public Integrity in Washington. At the time, Democracy 21's president, Fred Wertheimer, said: "By design, he's turned himself into a commodity. He's a walking amalgamation." Former Bill Clinton press secretary Joe Lockhart described Carville as "He's built a multimedia company from the ground up, and he's done so wisely. He is a futuristic role model. This could not have happened before 1992 when just a tiny number of people watched campaign consultants. They are now well-known in the public eye." Carville was said to be solely handled by the Washington Speakers Bureau, with a speaker's fee of $20,500 in 2004 for an hour on the podium, including first-class expenses and top accommodations.

FAQ: How old is James Carville?

FAQ: What is James Carville networth in 2020?