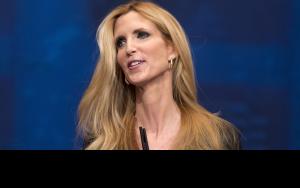 Ann Hart Coulter is a conservative media commentator, best-selling author, syndicated columnist, and lawyer in the United States. In the late 1990s, she rose to prominence as a media analyst, appearing in print and television news as an outspoken critic of the Clinton administration. Her first book was on Bill Clinton's impeachment, and it was inspired by her experience writing legal briefs for Paula Jones's attorneys and columns she wrote about the cases.

Coulter writes a syndicated column for the Universal Press Syndicate, which appears in newspapers and conservative websites. Coulter is also the author of 13 books.

Coulter's mother's line may be traced back to Puritan settlers in Plymouth Colony, British America, who landed on the Griffin with Thomas Hooker in 1633. Her father's family were Catholic Irish and German immigrants who arrived in America in the 19th century. During the famine, her father's Irish relatives immigrated to America, where they worked as ship laborers, tilemakers, brickmakers, carpenters, and flagmen. Coulter's father used the GI Bill to attend college and afterward idolized Joseph McCarthy.

James, an accountant, and John, an attorney, are her two older brothers. Coulter and her two elder brothers, James and John, were raised in New Canaan, Connecticut, by her family. In 1980, Coulter graduated from New Canaan High School.

Coulter was a member of the Delta Gamma national sorority and helped start The Cornell Review while at Cornell University.

She earned her Bachelor of Arts in history from Cornell in 1984 and her Juris Doctor from the University of Michigan Law School in 1988, where she served as an editor of the Michigan Law Review. Coulter was president of the local branch of the Federalist Society at Michigan and attended the National Journalism Center for training.

In 2002, Coulter's age was questioned. While Coulter claimed she was under the age of 40, The Washington Post columnist Lloyd Grove quoted a birthdate of December 8, 1961, which Coulter used when registering to vote in New Canaan, Connecticut, before the 1980 Presidential election, for which she needed to be 18 years old. On a driver's license issued several years later, her birthdate was allegedly reported on December 8, 1963. Coulter will not confirm either date, citing concerns about her privacy.

After graduating from law school, Coulter worked as a law clerk for Pasco Bowman II of the United States Court of Appeals for the Eighth Circuit in Kansas City.

Following the Republican Party's takeover of Congress in 1994, Coulter worked for the United States Senate Judiciary Committee after a brief stint in private practice in New York City, where she specialized in corporate law. Senator Spencer Abraham of Michigan assigned her to crime and immigration concerns, and she assisted in the drafting of legislation to hasten the deportation of aliens convicted of offenses. She went on to work with the Center for Individual Rights as a litigator.

Coulter is the author of 12 books and writes a syndicated newspaper column. She is recognized for her controversial style. She describes herself as someone who enjoys a good debate "Stir the contents of the pot. I don't claim to be objective or balanced in the way that broadcasters do ".. Clare Boothe Luce's satirical manner was something she admired. She also makes several public appearances, including on discussion shows on television, radio, and college campuses, where she receives praise and criticism. Coulter travels for 6–12 weeks a year on speaking engagements, and she travels even more when she has a book coming out. She made an estimated $500,000 on the speaking circuit in 2010, giving presentations on modern conservatism, gay marriage, and what she calls current American liberalism's hypocrisy. A pie was hurled at her at one of her appearances at the University of Arizona. Coulter has made harsh remarks toward hecklers and protestors at her talks on several occasions in defense of her principles.

Coulter has been engaged on multiple occasions, but she has never married or given birth to a child.

She has dated conservative writer Dinesh D'Souza and Spin creator and publisher Bob Guccione Jr.She began dating Andrew Stein, the former president of the New York City Council and a liberal Democrat, in October 2007. "She's attacked a lot of my friends," Stein said of the connection to the New York Post, "but what can I say, opposites attract!" On the other hand, Stein informed the New York Post on January 7, 2008, that the relationship was finished due to irreconcilable differences. Kellyanne Conway, who considers Coulter a friend, said in 2017 to New York magazine that Coulter "started seeing her security guard maybe ten years ago because she couldn't see anybody else." Coulter owns a home in Palm Beach, Florida, a Manhattan condominium, and a Los Angeles apartment she purchased in 2005. She is registered to vote in Palm Beach but not in New York or California.

FAQ: How old is Ann Coulter?

Quick Facts
Help us Edit this article and get a chance to win a $50 Amazon Gift card.
Last Modified: Sep 9 2021
You may also like
articles you may like