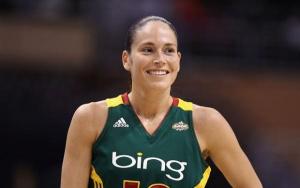 Sue Bird, is a beautiful and tall woman but most importantly she is a professional basketball player who plays for the club UMMC Ekaterinburg. She is an American-Israeli professional basketball player who has played for many other teams at the top level of WNBA including Dynamo Moscow, Seattle Storm and Spartak Moscow Region. She is a very fine player who along with her personal talent and skills, is a team player too and has won many matches and titles with her associated teams. Recently, she achieved another milestone by becoming the 13th ever woman player to 5000 points in her career with 2000 assist points. Crowned as the New York Daily News Player of the Year in her school level, she also won the Naismith Award and the Wade Trophy when she became the College Player of the Year. Born and raised in the United States, she is of Israeli ethnicity, and is an American by nationality.

Sue was born on the October of 1980, as the daughter of middle class parents Herschel and Nancy Bird, in New York City. She was born as the couple’s second daughter and the family who was originally from Israel has all got Israeli citizenship. Her father is a Russian Jew whereas her mother is a Christian by religion, and Sue has been brought up as a Christian as well. As a child, she was inspired into sports by her father and particularly into basketball by her older sister. Attending the Syosset High School, both the girls were regular starters for their school’s basketball team. While Sue played in a slightly defensive role, her sister would lead the attack and the team enjoyed many success. It continued after changing schools to Christ the King Regional High School. While in her senior year, the team enjoyed a lot of success and won the New York state championship, along with the National Title.

After playing fantastically throughout high school and college, she joined the national team in 2000 and competed for the Jones Cup Team, in Taipei. The team won their first gold medal with Sue, and she was the tournaments highest assist maker with 17 of them. Her performance then, won her a spot in the national team again, in 2002 while playing for World Championships in China. The team won all of their games, some easily and some competitively; as the team went on to pick up another title. Having played in professional level with her country, she has also been a highlighted player with her clubs. She played for Seattle Storm in the 2002 WNBA, and with an average of 14 points a game went on to lift the title at the end of the season. She also played internationally, with Dynamo Moscow for two years between 2004 and 2006. Reaching the finals of Russian Cup as well as European championships, she was hired to play for Spartak Moscow Region from 2006, where she won both those titles in a span of 2011.

Upon her return to the USA in 2011, she has been with UMMC Ekaterinburg and has continued her successful career. At the age of 34 years, she is still going well with no signs of retiring from the game. With a celebrated career, she is a big star for her country and this can be proved by the number of fans she has on her Instagram and Twitter.

FAQ: How old is Sue Bird?