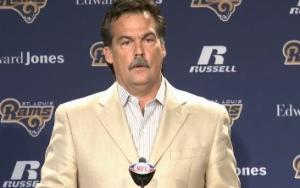 Jeff Fisher was born the 25th day of the month of February in 1958. Native of Culver City, California. He later moved to Los Angeles. There he enrolled into the William Howard Taft Charter High School while he was in his teens. It was from there that he started his football career, as he played in an offensive position. He was a wide receiver.

He did not remain a player for very long, he played at University of Southern California during his college years. During his three years with the Trojans he shared the field with big names in defense, such as: Joey Browner. The team won a nationwide championship in 1978. He was later drafted to the Chicago Bears. He played for almost half a hundred games during his five year tenure. He was both a return specialist and defensive back for the Chicago Bears.

He suffered injuries the years 1983 and 1985. The first one was caused by tackled of Bill Cowher, who at the time was the Philadelphia Eagles linebacker. It resulted in a broken leg. The later one was much more severe and was the one that ended his career as a player. He had an ankle injury. Despise this and being as a reserve for most of that season he was awarded with the Super Bowl ring. That was a good year for the Chicago Bears, in the XX Super Bowl, they defeated the New England Patriots.

Later on, in 1991, he served as the Los Angeles Rams defensive coordinator. There he met again with John Robinson his college coach. The very next year he passed to the San Francisco 49ers, there he was a defensive back coach from 1992 to 1993. At the start of 1994 and until November he was the Houston Oilers defensive coordinator. That same year, the month of November he succeeded the team coach, Jack Pardee. He was in charge of coaching for the last six games of that season. In his tenure as a coach he led the team to a 7-9 record the year after being hired.

From the Houston Oilers to the Tennessee Titans

He was the head coach for the former Houston Oilers, later named Tennessee Oilers and then Tennessee Titans. He worked there for fifteen years since 1995. Fisher accompanied the team in their first championship. During that season of 1999, the team went for the American Football Conference crown. The year that followed they achieved the National Football League best record with 13 to 3. That same year he became the fifth coach ever on the league to have led his team to win thirteen consecutive seasons. The good times did not stop there. The Tennessee Titans held the number one position on the National Football League for yards permitted. Making it a successful term for the defense.

The following years he continued coaching a struggling team. The Tennessee Titans, despise theirs downs were able to get back on track. With his leadership he was able to make the team win almost all the games that were left. That made it possible for them to win the American Football Conference South title. Apparently, their performance also won a place in the American Football Conference Game Championship. 2002 was the year when both the coach and the team thrived the most. Tying with Oakland for the National Football League best team. Also being named Coach of the Year by the Football Digest of the same association. On the same page, the 101 Awards of Kansas City awarded him for the same title.

The Tennessee Titans continued to thrive during his time as a coach. By 2005 he had become the 17th coach to reach a hundred victories with one team. The very next year, in a contest against Baltimore, he became the first coach the history of the franchise to lead a team in 200 contests. Fisher also went to join the very few others that had coach 200 with the same team, becoming the twelfth in the National Football League history.

From 2007 to 2010, Fisher led the Tennessee Titans threw a streak of victory and records. By 2011 it was formally announced that the coach was leaving the team.

He was hired as the 22nd head coach of the St Louis Rams in January of 2012. He earned the team fourteen victories only in his first years. Repeating his time with the Tennessee Titans he did not see the low scores as dirt on the road. He saw much potential on the young players and rookies, believing in their potential. In 2013 St Louis Rams finished the National Football League in the third place. That same season, despite of problems with the quarterback’s position, they improved in their offensive game.

In 2015 it was made certain that after almost four years as head coach his job was still secured. In 2016 the team moved to Los Angeles, there it was renamed Los Angeles Ram. He is still coaching for that team till this date, as his performance is a favorable one.

Apart from this he also has his own radio show with The Jeff Fisher Show. The show airs Mondays during the Los Angeles Ram season.

Jeff married Juli in 1986. They had three children together and stayed a couple for some time. She remained his wife until 2004. That year they both files for divorce, but got back together. It was not until four years later that the procedure began anew, with Juli denouncing inappropriate marital behavior. Another side of his life can be experienced with his twitter account, which has seen post and reposts from himself, the team and the fans. A downside to this is that it has been inactive since 2014.