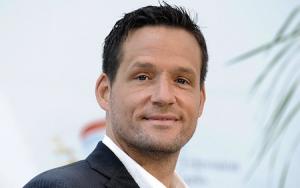 Josh Hopkins is known as an American actor and musician. He is most famous for his roles in Cougar Town and Ally McBeal.

Josh Hopkins was born on September 12, 1970 in Lexington, Kentucky. His father Larry Hopkins was a former US congressman. Hopkins got his primary schooling in Lexington. He was an excellent player for his high school basketball team. He got his higher studies from Sayre School before he moved to Auburn University. In college, he received training in voice and theater. After his college education, he returned back home to join the Actors Theater.

Josh and famous actress, Courtney Cox from the popular sitcom, Friends were spotted together having a romantic supper. In an interview with the Daily Mail in March 2011, Josh's father said that if Josh approves of her, he approves of her as well. Later on, Courtney turned to the media and said that they never had a thing.

Josh went on to date Cheryl Burke, an American dancer who won many dancing competitions including Dancing With The Stars.

During his acting career, Josh has appeared in many amazing films, television dramas, and theater plays. To kick off his entertainment career, he debuted in the play “The Picnic”. He had his first movie role in the film, “Parallel Brothers”. In that film, Josh had a very small role and unfortunately, the film was not released.

In 1999, Josh got a role in “Pirates of Silicon Valley” as a character named Paul Allen. He appeared in many movies like the romantic comedy film “Love & Sex”, “Auto Motives“, "The Opposite Sex”, and “Car Dog”.

Josh had some success in the television industry. In 1998, he got a role in the last season of “New York Undercover”. The television series “Ally McBeal” was a huge mainstream hit that Josh was happy to be involved in. Josh Hopkins also did guest appearance roles for the Fox hit series “Bones”. He seemed to be a favorite of producers who created crime shows because he also had a guest role in “Cold Case”. This small appearance was especially noticed for the chemistry between Josh and the cast of the show.

He was featured in Alanis Morissette's "Unsent" music video in 1999. He also depicted womanizer Charlie Babcock on the TV series Pepper Dennis (2006). Hopkins later worked with his former Ally McBeal co-star Calista Flockhart when he had a repeat role on Brothers and Sisters. Josh additionally had a role as Peter Manning on the dropped Fox drama Vanished (2006).

Josh appeared in the drama “Swing Town” which was banned and was not released for the season it was produced. The drama was controversial due to the negative portrayal of open marriages and wild parties in the era of the 1970s.

FAQ: How old is Josh Hopkins?