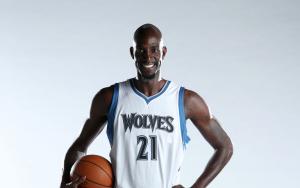 The basketball world wouldn’t have been the same without an enthralling player like Kevin Garnett. He plays the power forward and centers positions for the Minnesota Timberwolves. He became the first NBA player in 20 years to be directly picked up straight after college by the Timberwolves. He made an immediate impact by making the playoffs eight consecutive times. In 2004, he also won the NBA MVP Award.

He is born in a city of Carolina. He was born at the home of O’Lewis McCullough and Shirley Garnett in Greenville. His nationality is American and he has two siblings. His parents didn’t marry and they broke off. Even though his father’s involvement can be seen, he didn’t maintain a warm relationship with him. His mother raised all the kids alone. While he was at Hillcrest School, he found the first love of his life – basketball. He was picked by the Minnesota Timberwolves straight after college which never happened since 1975.

He played for the Timberwolves initially from 1995 to 2007. His impressive run during the 1996-97 season ensured a berth for the Timberwolves for the first time in history. But this didn’t deter Garnett from improving his game. He was awarded a 6-year contract worth $126 million in the 1997-98. But Garnett made sure that his game did the talking by taking up 9.6 rebounds, 1.8 blocks. They used to make the playoffs but eventually crashed out in the first-round. But, in the 2003-04 season, the Timberwolves finally got the monkey off their backs by defeating the Denver Nuggets 4-1 in the first round. Garnett had the best supporting teammates this time which made the win possible. But they eventually lost to the Los Angeles Lakers later in the series. The period from 2004 to 2007 was forgettable for Timberwolves as they couldn’t make the playoffs for the first time in eight years.

In 2007, Garnett traded in Boston Celtics in exchange for Al Jefferson, Ryan Gomes, Sebastian Telfair, Gerald Green and Theo Ratliff and he signed a $60 million contract extension for three years. He made a strong debut for the Celtics against the Washington Wizards with 22 points and 20 rebounds. Garnett was awarded the NBA Defensive Player of the Year for the 2007-08 season and he passed on the credit to his team’s effort. In the 2009-10 season, the Celtics eliminated major teams like Miami Heat, Orlando Magic etc to face the Los Angeles Lakers in the 2010 NBA Finals which they eventually lost to a spirited comeback by the Lakers in the decisive seventh game.

In the 2010-11 and 2011-12 NBA Seasons, Garnett and the Celtics lost to Miami Heat in the NBA playoffs but Garnett‘s performance was scintillating. In 2012, Garnett agreed to an extension of the 3-year contract with the Celtics worth $34million. But in June 2013, the Boston Celtics and Brooklyn Nets made a deal to trade Garnett with few others. The Nets made it to the 2014 Eastern Conference semi-finals where they lost to Miami Heat 4-1. In February 2015, Garnett agreed to be traded back to Minnesota Timberwolves and in July 2015, he re-signed with the Timberwolves to a two-year deal. In November 2015, he became the fifth player in NBA history to play 50000 minutes and the 15th player to surpass 26000 career points. The highest point in his career was his gold medal win in the 2000 Summer Olympics as a member of the United States national team.

He married his girlfriend Padilla in California. The couple is blessed with two daughters. The wedding was the reason why Garnett missed the Athens Olympics. Brandi is the sister-in-law of the famous Def Jam music producer Jimmy Jam Harris whose wife is Brandi’s sister Lisa Padilla.

Garnett’s wife accompanies him to most of his games and is even more attractive in person. Garnett’s net worth is an estimated $190 million according to the International Business Times and he resides with his family in a $4.6 million home, 8000 sqft home in Concord, MA.

Garnett has signed up for many endorsements including Nike and Adidas and draws a salary of $12 million annually. The most memorable shoes model released by Nike in honour of Garnett has been the Nike Air Garnett 3. This shoe personifies the journey of Garnett to an energetic individual in the highly competitive world of basketball.

FAQ: How old is Kevin Garnett?

FAQ: What is Kevin Garnett networth in 2020?