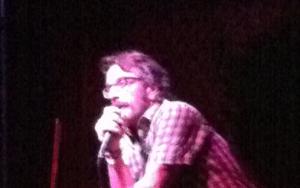 Marc David Maron is a standup comedian, actor and a podcast host. He was the host of the Marc Maron Show, Morning Sedition and also Breakroom Live.  Marc has been married twice. He married his first wife, Kimberly Reiss in 1997. They got divorced in 2001. In 2004, he married Mishna Wolff and divorced her in 2007. He then started to date Jessica Sanchez and in 2013, he announced on his podcast that he broke up with her girlfriend. In 2014, he mentioned that he was dating Moon Zappa. Three months later, he announced that he was single, in his podcast.

After his marriage failed in 2007, he planned to commit suicide in his garage, but, he started a podcast, WTF, which has the highest rated shows. His divorce from Wolff was very harsh for him that he uses it for most of his comedy shows. In June 2013, he announced that he proposed to Jessica. He said that he made pancakes for her on her birthday and placed the ring on top of it. After two failed marriages, Marc promised to make this one, adventurous and better. However, in October 2013, he announced that the relationship was very difficult and thus, he ended things with Jess. He said that there were a lot of reasons and it was too much for him.

He did not mention the exact reason and Jess was not available for comment. His affair with Moon started as a small rumor until he announced in his podcast that he was shocked when Moon gave a visit to his garage. He said that he always thought Moon was cool and they had a pleasant conversation. Soon, the flirting started and he asked her on a date. A few months later, he said that he was dating her. Three months later, he said that things did not work between them and he announced that he broke up with her.

When he was 35 years old, he said that he was in an unhappy relationship with Reiss and was addicted to drugs. That is when he met a fellow comedian, Wolff. He ended the relationship with Reiss and became the boyfriend for a younger woman. She was just 23 years old and he made her sober. He consulted two friends and one told him to go for Wolff and the other told him to be a responsible husband. After a few years, he divorced the younger woman too. After that, he became bitter and resentful. He went behind prostitutes and did not handle a few years of his life, properly. He again fell for a 29 years old woman, Jess. He said hat he never fell for an age appropriate woman.

There are no details about the separation settlement. A few sources indicate that he has children, but, there are no indications of whether it was with Reiss or Wolff and who got the custody of the kids. Though he mentioned that his life with Wolff was stressful, he did not mention the exact reason. The same goes for his romantic relationships. He never seemed to be in a relationship, for long.

FAQ: How old is Marc Maron?