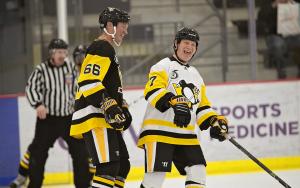 Mario Lemieux is known as a Canadian former professional ice hockey player and current owner of the Pittsburgh Penguins.

During his hockey career, Mario played parts of 17 National Hockey League seasons with the Pittsburgh Penguins from 1984 to 2006 before assuming ownership in 1999.

Mario Lemieux will perpetually be remembered for his staggering accomplishments of skill, dexterity and power on the ice. He won various National Hockey League awards, including six scoring titles and three Most Valuable Player honors. What hockey fans may remember about Mario most affectionately is Mario's mettle and determination in his battle against Hodgkin's disease during the 1992-93 season.

In January 1993, Mario was getting a charge out of the best period of his splendid career, and was poised to build up another NHL scoring record. At that point he was determined to beat Hodgkin's. On the morning of March 2, 1993, Mario completed his last radiation treatment, flew to Philadelphia, and scored a goal and an assist against the Flyers. He went back to his level of play right where it had been before his sickness, and drove his team to a series of wins and the best regular season record in the NHL.

FAQ: How old is Mario Lemieux?