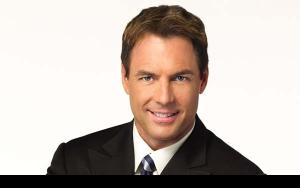 Impressively, he has assembled an impressive resume working for reputable media institutions including KWWL-TV, KSPR-TV, KCAL-TV (here he won two Emmys; for his work on the televisions station's special namely "Beyond Endurance: Madagascar" and "Beyond Endurance: Borneo"), ESPN, Entertainment Tonight and AOL.

Of course, you haven't figured it  out who he is yet. Have you? To make your guessing job easy, his first and foremost whopping interview was with President Bush. There's an interesting story attached to the KWWL news led interview. The story is Mark went to the President's location and actually said "I am here to shoot the president" in the process of seeking clearance for the interview,  and then the interview was put on hold.

Still, If you haven't figured out who he is, he has also enjoyed short appearances on television series including "Suddenly Susan", "The Practice"," CSI: NY", ''Half and Half", "The Practice", "The Young and Restless" and "Handy Manny". Nevertheless, he has also fulfilled a short role in the 1995 biographical movie about the United States President Richard Nixon called "Nixon".

Yes, you guessed it right. On this lovely day, we are going to learn something about the multi-dimensional persona Mark Steines.

Born on June 7, 1967, in Dubuque, Iowa, US, Mark Steines is a B.A. (radio and television) major from University of Northern Iowa. He initially got enrolled in the Cedar Fall based university as a merit student (football scholarship).

Steines enjoyed his breakthrough year after his graduation when he worked for Iowa based KWWl-TV as reporter and photographer. Previously, he was fulfilling a minor position at KWWI-TV.

Now fast forwarding to 2015, he is a three time Emmy winner who currently works as the host for the family targeted American home information and talk show "The Home and Family show" on The Hallmark Channel.

Moving on to his physical configuration, he is a tall man with the height of 6 feet. Four years ago, he started incorporating ten minutes exercise routines to his daily lifestyle. According to him, the workout plan is the reason behind his perfect health and fit body. Nevertheless, he is someone who eats and exercises in a managed way. He prefers to eat small amounts throughout a day rather than a large diet at once.

Talking about his relationship status, he is an identified divorcee. However, we have no clue on whether he is or dating someone or not at present.

As of 2015, it's been two years since his divorce with wife of 17 years Leanza Cornett, an American television personality and beauty pageant.

Last but not the least, he has also acquired comedy training, Meisner Technique training and voice-over training from The Groundlings, JoAnna Baron/DW Brown Acting Studio  and Kalmenson & Kalmenson voice-over respectively.

FAQ: How old is Mark Steines?