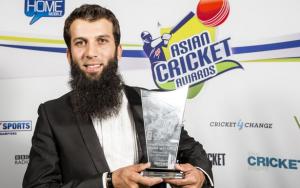 Moeen Munir Ali is an English Cricketer but belongs to Pakistani descent. The biography of the cricketer has encouraged a lot of people around the globe. The Cricketer was born on 28th June 1987 in Birmingham and currently is 29 years old. Ali’s grandfather moved to England from Kashmir. Ali used to play country cricket before Warwickshire in the early days of his career. Later, when the 2006 season ended the player moved to Worcestershire to pursue his career. Moving for Worcestershire turned good for his career because the player could win Warwickshire’s NBC Denis Compton Award for two consecutive 2004 and 2005. One weakness that he seems to be having is against short pitch bowling. England of late has been using Moeen Ali as an opener to take toll of the mandatory powerplay as he is perceived to be good at lofting the ball over the infield with ease.

Ali was a genius in cricket since his childhood. Only at the age of 15, he signed for Warwickshire. In the year 2005, Ali made his first-class debut against Cambridge University. After that year in 2006, he was selected for Under 19 Cricket World Cup which was held in Sri-Lanka. Immediately after the selection, he was promoted to captain by Andy Pick. He had an amazing tournament and made three half-centuries and took seven wickets. Ali's opportunities were somewhat limited, however, and Alex Loudon took his place in the side. In July 2006, with the expiry of his Warwickshire contract only months away, Ali brushed off rumors of a move to Worcestershire, saying "I don't know anything about it", but in September it was announced that Ali would indeed be leaving to join that county. The player himself said that he had been impressed by Worcestershire and felt it gave him the best prospects of furthering his career.

Moeen got to act as a captain for three weeks while Daryl Mitchell was injured during the 2011 seasons. At the end of the 2012 season, Moeen received a new five-year contract after the departure of former England International. He was also called to play against Australia by the England Lions. At the end of 2103 season; he was awarded by country cricket MVP award for beating Sumit Patel in the season. He was also awarded as the PCA player of the year in 2013.

His international cricket career boosted up in 2014. He made his debut in One Day International Cricket against West Indies. He player ICC World Twenty - twenty in Bangladesh with the England Squad. Moeen is an off-spin bowler. England was searching for a spinner after the retirement of Graeme Swann and found Moeen was the best fit for the position. Moeen got to present his batting style in the second Test, when he scored 108 runs and still not out. The left-handed batsman, Ali nearly saved England in the match but could not succeed as James Anderson fell on the last ball. In January 2015, Ali was nominated for the Best at Sport award at the British Muslim Awards.

FAQ: How old is Moeen Ali?