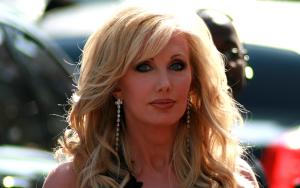 Morgan Fairchild was born on 3rd February 1950 in Dallas, Texas. However, her birth name was Patsy Ann McClenny. She is the daughter of Edward Milton McClenny and Martha Jane Hartt. Her mother was an English teacher at a school called Richardson High School in Richardson, Texas. Her mother died on 4th may 1999 out of stroke complications. Fairchild has a younger sister named Cathryn Hartt, who is interestingly an actress like herself. If you are wondering how Morgan changed her birth name, it was after a brief marriage with her then husband named Jack Calmes, with whom they divorced in 1973 after about 7 years of marriage. She is famously known as a prominent American actress.

Morgan Fairchild was a brilliant young lady who attended the Lake Highlands High School in Dallas, Texas in U.S.A, where she successfully finished her studies and eventually graduated in the year 1967.

Morgan’s career started at a very young age. At the tender age of 12, she was already performing on stage. During her teenage years, Morgan starred in a film called Bonnie and Clyde, which was aired in the year 1966. She was a lead role Fye Dunaway, together with the famous Warren Beatty.

Fairchild did so well that she got a role in a drama soap opera film called Search for Tomorrow in 1973, which aired on CBS. She acted as the murderous ingénue Jennifer Pace until she left the program in 1977. She then moved out to Los Angeles, U.S.A.

Fairchild afterwards appeared in a series of TV shows. In 1978, she played in Dallas a soap opera that went viral. She later on took a lead role in NBC’s series called Flamingo Road, which actually earned her a Golden Globe Award nomination for the Best actress in TV series Drama. She co-starred in Paper Dolls in 1984 and in 1985-1986 she was acting in Falcon Crest as attorney Jordan Roberts. She has appeared in numerous TV shows, including the comedy Murphy Brown, which got her a nomination for a Primetime Emmy Award for outstanding guest actress in a comedy series. Other includes Roseanne, Cybill, and Friends.

As recent as 2006, Morgan played in a series called Fashion House as Sophia Blakely. She was also in the famous Chuck series.

Apart from being an actress, Morgan is also a board member at SAG-AFTRA, where she has served as a co-chair in its Legislative Committee, National Executive Committee, SAG-AFTRA Relations Committee, Commercials Contracts Committee, Honors and Tributes Committee (HATS), and its Guild Governance and Rules Committee. In the year 2014, she became the spokesperson for burialplanning.com.

As mentioned earlier, Fairchild was married and divorced in 1973. At the present, is a married to Mark Seiler, a film company executive, who has been her husband since 1980 to date.    Fairchild is an activist as well and likes working with groups to raise awareness of AIDS related matters as well as issues related to environmental protection. Most of these passions are driven by her experience after being kidnapped in early 1970’s, where she was held twice forcefully contrary to her wish.

Morgan is also quite a philanthropist, and she has participated in numerous charity events.

Her net worth is approximately $10 million dollars and she is living the life of her dream.

Morgan Fairchild is a very strong, ambitious and talented actress. She also has a big heart, and people never get tired of watching her even after all these years she has been on their screens. She knows how to play her part best.

FAQ: How old is Morgan Fairchild?

FAQ: What is Morgan Fairchild networth in 2020?