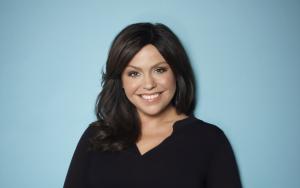 Rachael Domenica Ray was born in New York to James Ray, of French, Scottish, and Welsh descent, and Elsa Scuderi, a Sicilian American, on August 25, 1968. They shifted to Massachusetts, where the family ran four restaurants. When Ray was eight years old, the family moved to New York, where her mother managed restaurants.

Rachael Domenica Ray was born on August 25, 1968, in Glen Falls, New York. She was born to James Claude Ray, and she is of French, Scottish, and Welsh descent on her paternal side. Ray's mother is Elsa Providenza Scuderi, a Sicilian American. When Ray was eight years old, the family moved to Lake George, New York. Her mother managed restaurants, including the Lake George Howard Johnson's restaurant near the former Gaslight Village amusement park. When Ray arrived in New York City in 1995, she began working at a candy counter. She then managed a pub and even taught courses for people who didn't know how to cook, leading to a radio show which eventually paved the way to her TV show.

Rachael Ray's career in television took off when she hosted the show 30 Minute Meals on Food Network for 11 seasons from 2001 to 2012. In 2005, she signed a deal to host a syndicated daytime TV talk show. The show was titled Rachael Ray and premiered on September 18, 2006. Her repeated appearances on The Oprah Winfrey Show to help fuel the show's launch, similar to how Dr. Phil's show started based on his frequent visits to Oprah. Her show taped its episodes in New York City. During the syndication announcement, Ray said, "People know me for my love of food, but I have so much more I want to share."

Throughout her career, Rachael Ray has endorsed many products like the packing wrappers of Nabisco Crackers. Her designs even appear on sheets, blankets, and coverlets of WestPoint Home markets. Though she explicitly says she isn't good at making coffee or anything that requires measured ingredients, Dunkin' Donuts hired Rachael as a celebrity endorser. Online bloggers complained that Dunkin Donuts was a front for Islamic terrorists. The white and black scarf that the audience saw Rachael wearing in the ad was also considered a symbol of the Islamic terrorists. Though both Rachael Ray and the company denied the connection between the company and the terrorist group, the mounting pressures from online backlash made Dunkin Donuts pull the commercial.

In 2006, Ray launched the "Yum-O!" nonprofit organization. Its mission is to "empower kids and their families to develop healthy relationships with food and cooking. This is achieved by teaching families to cook, feeding hungry kids, and funding cooking education." In November of 2006, Ray became a spokeswoman for Nabisco crackers. She appears in commercials and on boxes for the many Nabisco products.

At the start of 2007, WestPoint Home launched sheets, blankets, and coverlets designed by Ray. Within six months, WestPoint expanded Ray's bed and bath line to include the Moppine, a two-in-one dish towel/oven mitt, since Ray is often seen with a kitchen towel over her shoulder that doubles for her as a kitchen mitt.

In May of 2007, Ray's recipes were made available on AT&T cellular phones via Rachael Ray Recipes on the Run. In July of 2008, AT&T introduced Rachael Ray's Nutrish pet food. The dog foods are created from recipes Ray developed for her pit bull, whom she had trained to respond to the name, Isaboo. All proceeds from selling these products go to Rachael's Rescue, a charity that Ray organized specifically to assist at-risk animals. In December of 2016, PulteGroup started Rachael Ray Home Collection for its interior design division.

Throughout her career, Ray has earned a total of 11 nominations for "Daytime Emmy Award for Best Outstanding Talk Host," three of which she won in the years 1996, 2008, and 2009. She has also written 27 books ranging from her first book, 30 Minute Meals in 1999 to Everyone Is Italian, on Sunday in 2015.

Rachael Ray married John Cusimano, a prominent lawyer and the lead singer of the rock band called The Cringe, on September 24, 2005. The pair had their dream wedding in Montalcino, Tuscany, Italy. Racheal marriage attracted a lot of attention and fueled many rumors, a downside to being a celebrity. Even while Ray and Cusimano were still newly-weds, the wave of stories began flaring up. The most scandalous of the rumors was not about Ray but rather about her husband, John Cusimano. Jeannine Walz, a Las Vegas native, called Cusimano a "freak" who used to pay her a large amount of money at regular intervals over five years to perform sexual acts. Even after the wedding with Ray, Cusimano visited Jeannine at various places, including her apartment.

The marriage of Rachael Ray and John Cusimano was reportedly on the rocks for a while due to the news of John's frequent visits to a swing club called "Checkmate." The media reported that John went to this club six times with a female escort, not Ray. The relationship was rumored to be heading for divorce, but it has weathered various scandals. The rumors of divorce from Cusimano gained more momentum as the media saw the celebrity chef hunting for an apartment with her mother.

Rumors also spread that settlement talks were being processed before the couple ended up in a courtroom. Thus far, Ray and Cusimano have remained married. In April 2019, Ray shared a story about why they have been able to stay strong for long John Cusimano has indeed sprung up on her morning show frequently, but not even her frequent viewers know about how her 14-year marriage started. Rachael and John's story started one late night at a shared companion's birthday celebration where they first met. Their discussion spun around foo. They hit it off and hung out all night talking about their shared interests.

FAQ: How old is Rachael Ray?