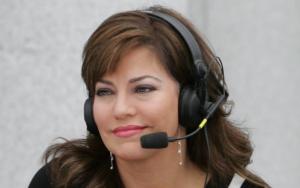 Robin Meade is an anchor and correspondent at the morning program of HLN, Morning Express with Robin Meade. She also serves as the co-anchor of the show Accent Health on Turner Private Network alongside Dr. Sanjay Gupta.

Born in April 21, 1969 in New London, Ohio, Robin Meade studied at the New London High School. She majored in radio and television production, performance and programming and also a minor in political science at the Malone and Ashland University. She married Tim Yeager in the year 1993.

Meade started her career in television broadcasting at WMFD-TV situated in Mansfield, Ohio. She was a reporter initially. Later she was made anchor and reporter when she started working for WCMH-TV located in Columbus, Ohio. She then shifted to WJW-TV located in Cleveland. She was made news anchor for the morning show TODAY at WSVN-TV in Florida, and she also hosted the noon show in addition to serving as health reporter. She later started working for WMAQ-TV which is a NBC Chicago affiliate. She did the morning newscasts and later was made newscaster for the weekend newscasts. She was also the general assignment reporter at the station. She joined HLN in 2001 and is currently based at Atlanta, the global headquarters of CNN.

Robin Meade has anchored major news events covered by the network including the wars in Iraq and Afghanistan, the inaugural ceremonies of President Barack Obama, and also the memorial coverage of Michael Jackson. She has also done exclusive coverage of the freed American hostages after they were released from their captors, Fuerzas Armadas Revolucionarias de Colombia (FARC). She also did the tandem skydive on the occasion of the 85th Birthday of President Bush in Kennebunkport, Maine. She is also the host of the show Salute to Troops, which is a daily message show for the U.S. troops sent to them by their family and friends through videos and photos.

Robin Meade is also an author. She has written the book titled ‘Morning Sunshine!: How to Radiate Confidence and Feel it Too’, published in 2009. The book was on the number 12 in the section, Advice, How-to and Miscellaneous of the New York Times Best Seller list. Meade has also been a host on the show Ask Oprah’s All Stars along with Dr. Phil McGraw, Dr. Mehmet Oz and Suze Orman. In the year 2011, she also released a music album featuring country music titled ‘Brand New Day’. She also released a single Dirty Laundry to the country radio.

Robin Meade has won many awards and recognitions during her career as reporter, author, and singer including a regional Emmy for her coverage of the collision between a train and school bus in Fox River Grove, Illinois, which had a death toll of seven and over 24 injured. She was also nominated for an Emmy for her report on the ways to decrease the risk of injury in case of plane crashes that have high survival chances.

FAQ: How old is Robin Meade?