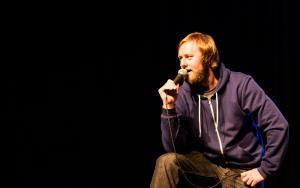 Rory Scovel is an American comedian and actor who was born on August 6, 1980, in Greenville, South Carolina. He grew up playing sports including basketball, tennis, and soccer and described himself as a hyperactive class clown. Rory attended St. Mary's Catholic School and Greenville High School. He went on to attend University of South Carolina Upstate where he played soccer for four years. Scovel went on to begin a career in stand-up comedy and landed his first acting role in the 2007 film "Groom with a View". His first stand-up performance was at an open mic night in Spartanburg, South Carolina. Scovel then moved to Washington D.C. where he performed comedy for three years. He then moved to New York City where he performed for another three years until moving again to Los Angeles, California. Scovel went on to compete in the 2006 Seattle International Comedy Competition. In 2011, Scovel appeared on "Conan" alongside fellow comedian Jon Dore. The same year, Scovel released his first stand-up album titled "Dilation". Scovel is currently the co-host of "The Pen Pals Podcast" with comedian Daniel Van Kirk. He has also appeared on multiple other comedy podcasts including "Comedy Bang! Bang!" and "Doug Loves Movies".

FAQ: How old is Rory Scovel?