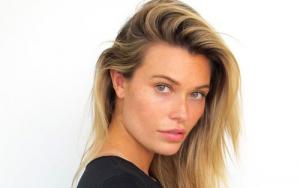 Samantha Hoopes is known as an American model. She is most famous for appearing in the Carl's Jr. and Hardee's Most American Thickburger advertisement. She is also known for her spread in the 2014 Sports Illustrated's 50th Anniversary Swimsuit issue.

Samantha Hoopes was born on February 10, 1991 in Doylestown, Pennsylvania. She is a proud graduate of Central Bucks East High School. She is the youngest of five sisters in her family. She attended the Barbizon Performing Arts Academy to study modeling and acting instead of the typical school subjects like reading, math, and science.

She initially studied at a branch campus, then went to Penn State University to major in business after changing her major from kinesiology. Her idea was to be a gym teacher and coach a team on the side. She played field hockey in middle school but stopped after dreams of modeling entered her life

FAQ: How old is Samantha Hoopes?

FAQ: What is Samantha Hoopes networth in 2020?