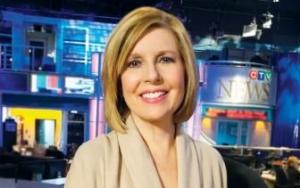 Sandie Rinaldo is known as a Canadian journalist and news anchor. She is most famous for her role at CTV National News.

Sandie Rinaldo was born as Sandra Brycks on January 16, 1950 in Toronto, Canada. She studied at York University and graduated with a bachelor's degree in fine arts. At an early age, she had a dancing role in a children's program called "Where it's At".

Sandie Rinaldo was one of the first women in a male-dominated industry to get a permanent post as a national news anchor. Her career as a journalist has been long and successful and she is still very active within the industry.

After she left York University, Sandie Rinaldo started with CTV as a junior secretary. She has had an extraordinary career in journalism in which she has had various roles. She has been the co-anchor for local World Beat News which is affiliated to Toronto CFTO. It was a position she had for two years from 1989 to 1991. She also had the anchor role for CTV on weekday afternoons. She started the main post as a weekend anchor for CTV in 1985. CTV is the most-watched national newscast in Canada. Sandie also works as a co-host and reporter for W5.

The road to success was not always smooth but because of her effort, she became very successful at CTV. During this climb to success, she was recognized and awarded numerous awards. She was awarded 8 awards from 1990 to 2005. These awards were varied from well-known organizations such as The American Film and Video Awards for the work she did on childbirth in 1990 to the Bryden Alumni award York University in 2005.

During her long career, she has interviewed many people. One of them was the legendary musician, Bob Marley who she says is one of her most memorable interviews.

Sandie has done some acting on TV but mainly on awareness programs such as missing children cases. The program was created to try and get the public to come forward and give information about missing children. She has also produced video documentaries on childbirth and pre-natal care.

Sandie has had an illustrious career and one of the reasons that allowed her to pursue her dreams was because her husband Michael was always there to support her. She has given a lot of credit to her late husband for her career path and balanced family life that they enjoyed with their three daughters.

She and Michael shared the responsibilities of the household. As soon as the first of three daughters was born, she would work different hours from those of Michael. This was so that she could pursue her career without having the added responsibility of bringing up the children. If her work demanded longer hours or travel, she was always assured that her husband would be there for the children.

In 2005, her husband tragically died from lung cancer. Sandie is living on her own but her three daughters are there to support her. She has been blessed with one granddaughter who she loves dearly. The granddaughter was born 5 weeks prematurely and Sandie was out on a shoot in Antigonish, Nova Scotia when she got the call from her daughter. She rescheduled all her appointments and went straight to the airport to be with her eldest daughter.

FAQ: How old is Sandie Rinaldo?

FAQ: What is Sandie Rinaldo networth in 2020?