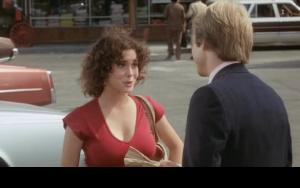 Born on September 10th, 1959, Stacey Nelkin is an American film and television actress. Her starting role is for the role of Bonnie Sue Chisholm in the CBS western miniseries The Chisholms back in 1979. Her role was later replaced by Delta Burke in 1980. She made an appearance in the film of Halloween III: Season of the Witch in 1982, in the role of Ellie Grimbridge.

She was also scheduled to be in Blade Runner, being the part of a sixth Nexus-6 replicant that escapes from the foreign planet and travels to earth, but budget contraints resulted in the role being cut from the film very early in the production process.

Her screen test for the role of Pris is on the collectors edition of the DVD for the movie. Guest appearances were made by Nelkin throughout her career, including spots on CHiPs, The A-Team, and Hunter. She has been married three times.

FAQ: What is Stacey Nelkin networth in 2020?