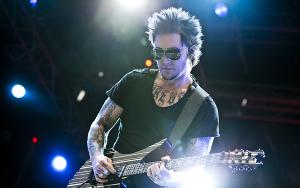 Synyster Gates was born on 7 July 1981 in Huntington Beach, California, United States. His father who was also known by the name of “Papa Gates” was a musician, comedian, author and part of a rock band, Sam the Sham’s in 1970’s, and owned a studio. His father’s name was Brian Elwin Haner. Synyster’s original name is Brian Elwin Haner Junior. He has a brother called Brent. His parents divorced and remarried. He has a half-brother named Johnny from his mother’s second union.

McKenna is his half-sister from his dad’s second wedlock. Brian Haner and Jan Gera were his parents. They were divorced when he was in school. For studies he went to Musicians Institute in Los Angeles, California. Stairway to Heaven was the first song he learned. He was so talented that when he came in 6th grade he was able to recognize the chord of song just by using his sense of hearing. Music seems to be in his blood. He got his first guitar from his grandparents. He had a dog named Pinkly.

On May 7, 2010 Synyster Gates married to Michelle DiBenedetto at Mexico. She is a supportive wife. He was a steady boyfriend when she was his girlfriend, they had been dating since eight grade. She designs Synyster’s clothes. Their marriage seems to be wonderful. But there is also a rumor that Gates is divorced because his wife cheated on him. However, many interviews and posts online confirm that they are happily married and that she has no reason to cheat on him. She is not having an affair. Coming from a broken family, Michelle probably understands the value of a family and loves her husband.

Regardless of the rumors, it is given that his childhood sweetheart is here for the long haul. They are rumored to have said their wedding vows on 7th May 2010. Shadows, who is a part of his band, Avenge Sevenfold, is rumored to be brother of Michelle. However it is also rumored that Valary is a twin sister of Michelle who is married to M.Shadows due to which Shadows and Gates are brothers-in-law. He is a loving husband. Their first child came into existence on 12th May, 2017, a son named Nicolangelo Saint James Haner also known as "Nicci".

Syn’s contribution and loyalty to Avenge Sevenfold is commendable. He sings and jams along with Zacky Vengeance. Gates started his band with the late drummer Rev. They had been together since early years. He is deeply influenced by Dream Theatre, and Gun and Roses. He also started a band with Rev called Pinkly smooth which came into being in 2001 at Huntington Beach, California, He plays lead guitar, vocals, piano and keyboard. He also owns a clothing line called Syn Gates Clothing. His better half is a clothing designer. She manages and designs his line of clothing.

He has won the award of “Guitarist of the year,” and “young shredder of the year,” in 2006. He is on rank no. 87 in Guitar Worlds 100 greatest guitarists of all time in year 2016. Gates was also declared as best metal guitarist in the world by Total Guitar. He got many achievements in his life.

In 2010, Guitar World included him as one of the 30 greatest shredders of all time. They described that he is able to perform finger-twisting licks, acrobatic sweeps, devilish chromatics and towering dual-harmonies. He was also selected as one of the Guitar Hero’s in 50 fastest guitarists. His dressing sense was so good that in Guitar World in 2010 readers’ poll he was selected as Snappiest Dresser and the Best metal guitarist.

Rock One Magazines 2010 readers’ poll elected him the no. 3 best musician in the industry. And he succeeded to achieve “Revolver Golden God” award for Best Guitarist with band mate, Zacky Vengeance on April 20, 2011. In Revolver magazine’s Special Edition which was published on the same day as the Nightmare album, Gates told to the media that he started writing the song “So Far Away” in the memory of his grandfather but now this song is about his band mate, best friend and the Rev drummer of A7X who expired on 28 December, 2009.

His signature style of dressing is his tattoos, black tees, hats, and cool shades. He has lots of tattoos and piercings on his arm. Tattoos and piercing are symbolic to any metal rock band artist. He also owns fedora hats in black and red colors. He is also very charitable by nature. He auctioned his guitar and raised money to help the California victims of wildfire. He is obsessed with hats and owns many hats. He carries all of them with him, while he is travelling. His hat luggage generally occupied the seat of his late band member, Rev. He loves to wear gloves and black nail polish. He wears a sleeveless shirt most of the times to show-off his tattoos. He was declared as a Sexiest male in 2008 Kerrang Readers Poll.

His net worth is approximately sixteen million dollars.

His following on instagram has reached to 13.1k. He has most of the followers on twitter where his following is reached to 49.1k while on Facebook he has around 48k likes on his page named Synyster Gates.

FAQ: How old is Synyster Gates?

FAQ: What is Synyster Gates networth in 2020?