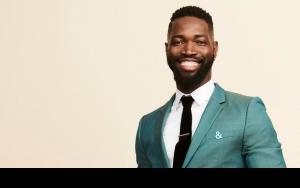 Tarell Alvin McCraney was born in Liberty City, Florida on October 17, 1980. McCraney was always an excellent student and he went on to attend the New World School of the Arts (NWSA) in Miami, Florida. It was impressive that he found it within himself to go to school because his mother was an addict. There, McCraney earned the exemplary artist award and the Dean's Award in Theater. McCraney was an ambitious youth and even while he was attending NWSA, he was also applying to and was eventually awarded an honorable mention by the National Young Arts Foundation in 1999.

McCraney went from the New World School of the arts in Miami to The Theatre School at DePaul University, it was there that he received his BFA in acting. This wouldn't be the end of the hungry McCraney's career, he was not done learning. The ambitious young man graduated from Yale School of Drama's playwriting program. For his work at Yale, McCraney received the Cole Porter Playwriting Award when he graduated.

The talented McCraney even holds an Honorary Warwick University Graduate. It wasn't long before McCraney began finding work with such directors as Tina Landau of the Steppenwolf Theater Company in Chicago, B.J. Jones, and David Cromer. The wide array of talent McCraney surrounded himself with is a testament to his skill and passion. McCraney even went on to co-star in the Chicago premiere of Joe Penhall's "Blue/Orange". During this time, he developed a professional relationship with Peter Brook and Marie Helene Estienne, a French director.

McCraney began to see major success on July 1, 2017, when he became chair of playwriting at the Yale School of Drama. In 2010, McCraney became the 43rd member of the Steppenwolf Theater Ensemble. His career wasn't limited to the theater, McCraney even co-wrote the 2016 move "Moonlight" based on his own play "In Moonlight Black Boys Look Blue". The work on "Moonlight" earned him an Academy Award for Best Adapted Screenplay.

Despite being an award-winning playwright, McCraney has found himself struggling to come out as gay and opens up to Ben Fraser Lee about his life as a playwright, Oscar drama, homophobia, and his most recent success with "Moonlight" in this insightful interview.

Ben Fraser Lee: "Given the long journey that your story has taken from the stage to screen, how much do you still recognize from your own experiences?"

McCraney: "The original script was different in form, in terms of the three chapters were told simultaneously so in that way it was different. However, there’s a lot in it that is the same. Barry worked really hard to preserve some of the original voice and I think what he also did is work hard at putting a lot of space between it. It feels ultimately personal, even the parts that I didn’t write feel personal because I feel like they are connected to the same story, the same struggle, the same questions. It doesn’t feel foreign at all, in fact sometimes it feels too close."

Ben Fraser Lee: "Was it a difficult experience finally watching the film?"

McCraney: "The first time, no. I think I was just so excited to see something that looked exactly like memories to me. Then the glee of that wore off – and I did remember feeling very depressed and very heartbroken about a lot of it. Mostly because these are not things that I have found the answers to and understand how they work. I actually ended up feeling that these are still looming questions in my life, questions about my own identity and my own self-worth that I’m still trying to figure out. Then seeing the film again, I was like shit, these are still here and they’re not going anywhere."

It is about the big issues like identity and homophobia but also, I don’t know if I’ll ever be done trying to suss out the trauma of growing up with an addictive parent. I don’t know if that will ever go away but I wish like hell that it would. It is difficult to watch and re-engage with but ultimately necessary because it’s brought to bear some very serious questions for me. Also, even in my career, why aren’t I telling more intimate stories? I feel like I tell intimate stories in plays but why am I not telling stories like this that lay me bare. Not exploitative but just getting at the sort of hard truths of things."

Ben Fraser Lee: "There are so many important LGBT stories that have been straight-washed on the big screen. Even though many of the themes are universal, how reticent were you to hand the project over to a straight writer/director?"

McCraney: "Barry had tremendous respect for what the piece was. He never came in trying to turn it into something else. In fact, he dug his heels in about certain things that were not going to go away. There was no reticence with Barry. He also didn’t ask any of the actors if they were GLBT-identifying, he just cast them. We were telling a coming of age story that was dealing with queer identity and nobody tried to sideswipe that. It’s happened in other instances but not here. We knew that there were not going to be any white characters in it. There were no white characters in the original script. It’s just very difficult for you to see white people in Liberty City (the area shown in the film). They knew that and they were more than cool with it. My reticence was more about how much to say and how much is necessary in order to make the story as authentic as possible."

In another interview with American Theater, McCraney describes wanting to foster new playwrights and keep the magic of theater going. One of the biggest things he has said is about how much talent is in America. McCraney talks about having to whittle away and narrow down the process of choosing the best talent. He goes on to say that most students come up to him for advice about starting their career and other professional-related but he doesn't mind them.

McCraney describes how he was always excited to see what the younger people he was teaching were doing and the new things they would come up with. He says you can spend enough time to tell which ones are the writers and he focuses on telling them just to be themselves. He goes on to say that his own advice sometimes rubs off on him too.

Tarell Alvin McCraney has been in theatrical productions his entire life, some of his earliest works include "Head of Passes", "Choir Boy", "American Trade", and "Wig Out!". Other plays he was involved in include "The Brother/Sister Plays Trilogy", "Without/Sin", and "Run, Mourner, Run". As far as his writing plays, McCraney wrote, "The Breach", and "In Moonlight Black Boys Look Blue".

Tarell Alvin McCraney has had a fruitful career which has earned him many awards including the "Whiting Award" in 2007, "London's Evening Standard Award" in 2018, "New York Times Outstanding Playwright Award in 2009, the "Windham-Campell Literature Prize" in 2013, the "Academy Award for Best Adapted Screenplay: Moonlight" in 2017, "PEN/Laura Pels International Foundation for Theater Awards" in 2017, and a "United States Artists Fellowship".

FAQ: What is Tarell Alvin McCraney networth in 2020?