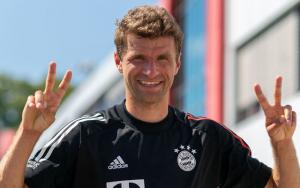 Thomas Mueller is an American rocket engineer and rocket engine designer, a founding employee of SpaceX, best known for his engineering work on the TR-106 and SpaceX rocket engines.

Tom Mueller was born in October 1963 in St. Maries, Idaho, a tiny logging community with a population of about 2500 people. Tom's father was a logger. Growing up in St. Maries, Tom was unlike his other friends; while his friends played in the woods, he would often go to the local library and read books or watch his favorite TV show 'Star Trek.' From a young age, he was interested in technology and was determined to understand how things worked. At the age of 10, he could repair a broken clock, a lawnmower, or anything that needed fixing.

Tom developed an interest in rockets and started building model rockets beginning with the famous Estes models. A 12-year-old Tom made a space Shuttle model with boosters that could safely land back on the ground. His success and work rate motivated him to do more, and later on, he worked on building actual rocket engines using his father's oxy-acetylene welder machine. With the ideas he was able to gain from books, he started studying and testing the performance. The model won him various school competitions and science fairs.

Coming from a lower-middle-class family, Tom couldn't afford to go to reputable schools, and due to the financial state, his father wanted him to be a logger so that he would bring some money into the house. But Tom's determination was high, so he joined the University of Idaho, which was seventy miles away, but was the only in-state university whose tuition was affordable.

Tom worked as a logger during the summers, saw the woods, and got logs on a line machine to earn his tuition fees. He graduated from the university and moved to California, as the region was known for its aerospace industry. Tom declined several job offers in Idaho and Oregon as it wasn't space-related and agreed to a job at Hughes Aircraft, a company that manufactured satellites. Even though it didn't deal with rockets, he was happy because it was still space-related.

Soon Tom began working for TRW Inc, developing liquid-fuelled rocket engines, and he advanced the TR-106 engine (hydrogen-fuelled engine with 2900 kN of thrust – one of the most potent engines, back then). Mueller also completed his Master's degree in Mechanical Engineering at the Loyola Marymount University during his work at the TRW Inc.

Tom was left unsatisfied working for TRW as his ideas and goals were left lost in a diverse corporation, so, just as a hobby, he began building his engines. Soon, he expanded his hobby and met like-minded individuals focused on the amateur experimental rocket, and the group was called the Reaction Research Society. Tom quickly became a prominent member of the group, as he built large working engines all by himself. The group tested them at the RRS base in the Mojave Desert.

In late 2001, Tom began constructing a new liquid-propelled engine in his garage and his friend's warehouse. With the successful test of the engine he built in 2002, Tom became an unofficial king of Rocket science amongst rocket enthusiasts. The machine he made weighed 36 kg and had 58kN of thrust. His work raised much admiration amongst the rocket enthusiast and also Elon Musk. So. Musk met Tom's amateur group in their warehouse and was surprised to learn Tom understood and knew everything needed to know about rocket engines.

In 2002, moving to the start-up, SpaceX was a profound change for Mueller, as he recalls saying, 'TRW is a huge company with a tiny propulsion department, whereas here in SpaceX I'm kind of a king.' Mueller focused on SpaceX's rocketry, fulfilling his childhood dreams and serving as a propulsion engineering vice president for more than a decade. In 2014 he took the CTO role of SpaceX, building and managing the group of engineers responsible for propulsion.

Mueller is widely known for developing rocket engines from scratch; he helped develop the Falcon 1 Kestrel engine engines, the Falcon 9, and Falcon Heavy Merlin engine, amongst other spacecraft engines for SpaceX. To this date, SpaceX has launched 100 Falcon 9 rockers, landed 67, and reused 46.

The Falcon 9 rocket ushered a new spaceflight era; NASA hadn't launched humans to space since its Space Shuttle was grounded in 2011; Falcon 9 propelled NASA astronauts aboard the Crew Dragon spacecraft to the International Space Station.

Mueller's legacy in SpaceX remains intact, and after many incredible accomplishments working almost for two decades at SpaceX, Mueller formally announced his retirement on November 30. Mueller wrote on his Twitter, "I retired from SpaceX today! Thank you, Elon Musk, it was quite a ride!" Elon replied. "Thanks for everything you did to help build SpaceX! Some of the best memories ever."

FAQ: What is Thomas Mueller networth in 2020?