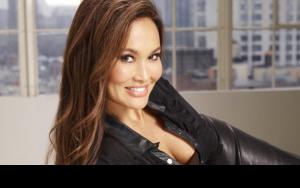 Tia Carrere is an American actress of movies and TV shows, a voice actor, model as well as a singer. She is known for her roles in shows like Lilo & Stitch: The Series, Relic Hunter, General Hospital and Wayne's World. Likewise, she also rose to fame after appearing in reality TV series like The Celebrity Apprentice (season 5) and Dancing with the Stars (season 2). Following a rejection at the Star Search program at 17, she got a role to play in Aloha Summer, at the age of 18 and marked her debut into acting. With the success that followed, she returned to Los Angeles and started to work as a model before getting another role in Airwolf series.

Her fame reached to the heights after she played in General Hospital; from 1985 to 1987 as Jade Soong Chung. In 1991, she appeared in a couple of movies Showdown in Little Tokyo and Harley Davidson and the Marlboro Man; although she appeared in several guest roles in between. Then she played as a musician Cassandra in the film Wayne's World, where she sang the songs by herself; and debuted as a singer. She also was casted in the sequel Wayne's World 2 and cancelled a role in Baywatch for that. Some of her other strong appearances and prominent roles have come in True Lies (1994), The Immortals (1995), High School High (1966), Kull the Conqueror (1997) Lilo and Stitch (2002), Aloha, Scooby-Doo! (2005), and many others.

She was born as Althea Rae Janairo on the 2nd of January, 1967 in Honolulu, Hawaii, United States. Born to immigrant Filipino parents, she has got mixed ethnicity of Chinese and Spanish, but is an American by nationality. Her father Alexander Janairo worked as a banker whereas her mother Audrey Duhinio Janairo was a computer supervisor. She describes her childhood to be very normal and easy and was educated in an all-girls school at Sacred Hearts Academy. With a dream of acting and modeling from her early age, she also received training in music as well as vocals. After graduating from high school, she started out as an actress.

With a beautiful and attractive face; she is also known for her attractive personality and is regarded to be very sexy by her fans. In a poll by People’s Magazine in 1992, she was listed in the "50 most beautiful people" list. With a height of 5 feet and 8 inches tall, she has got a very long and sexy pair of legs with a perfectly slim and hot physique. With her last recorded weight of 58 kg, her body measurements read 34C-26-36 inches. She reveals her secret to her fitness being regular workout and exercise as well as a healthy and balanced diet. She has got a lot of hot pictures in bikinis that can be found over the internet. Also, she has done some hot photo shoots for Playboy magazine which became the top selling magazine in 2003. Her photos were also published in the Playboy’s German edition, in 2006 and was a sensation across Europe.

FAQ: How old is Tia Carrere?