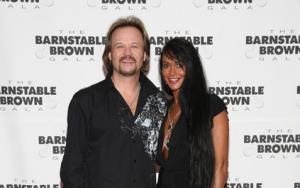 James Travis Tritt was born on February 9, 1963 in Marietta, Georgia. He is an American country music singer, songwriter, and also an actor. Born from James and Gwen Tritt, he had the music on his blood since he was very young: Travis received his first guitar when he was 8 years old, and he taught himself how to play it. He started playing the guitar at school, and he’s been invited to play for his class but also in front of other ones. When he was 14yo, he got another guitar as a present from his parents, and he learned more songs even from his uncle, Sam Lockhart. Travis attended the “Sprayberry High School”, where he started writing songs.

One of his first compositions, “Spend a Little Time”, was about a girlfriend with whom he had broken up. Travis founded a bluegrass group with his friends, and he placed on the second place in a local tournament. Travis’ parents divorced, and he went to live with his mother. He worked at a furniture store, as a supermarket clerk, and at an air conditioning company. His father didn’t believe he could have become a successful musician, while his mother wanted him to play Christian music rather than country. With the help of the executive of Warner Bros Records, Danny Davenport, Travis recorded some demos, including the demo album “Proud of the Country”, that convinced someone at the Warner Bros division of Nashville to sign James in 1987. His first single has been “Country Club” in 1988, and it spent 26 weeks in the Hot Country Singles & Tracks, reaching the position number 9.

This song was also the title of his debut album. His second single “Help Me Hold On” reached the number 1 in 1990, and the other third and fifth singles always of his debut album, the tracks “I’m Gonna Be Somebody” and “Drift Off to Dream”, reached the number 2 and the number 3 of the Hot Country Singles & Tracks charts, while the track “Put Some Drive In Your Country”, reached the number 29 on Hot Country Songs. His album sold more than 1 million copies, and got certified as platinum by the RIAA in 1991, becoming later in 1996 a double-platinum. Travis won in 1990 the award from Billboard as the “Top New Male Artist”, while in 1991 he won the Horizon Award.

He also released his second album, “It’s All About to Change”, that became a triple-platinum, with all four of its singles that reached the top 5 on the country music charts (the tracks were "Here's a Quarter (Call Someone Who Cares)", "The Whiskey Ain't Workin'," "Anymore", and "Nothing Short of Dying"). Travis sang with Marty Stuart the song "The Whiskey Ain't Working", and the duet won the “Grammy Award for Best Country Collaboration with Vocals” in 1992. Travis and Marty began a tour in 1992, the “No Hats Tour”, and in August of the same year Travis released his third album, “T-R-O-U-B-L-E”. The song “Lord Have Mercy on the Working Man” reached the number 4, while it follow-up, “Can I Trust You with My Heart”, reached the number 1 in the Billboard. The other singles “T-R-O-U-B-L-E”, “Looking Out for Number One”, and “Worth Every Mile” reached respectively the places number 13, 11, and 30.

FAQ: How old is Travis Tritt?