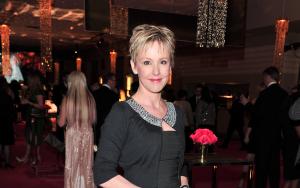 Wendy Mesley is known as a Canadian television journalist. She is most famous for being the host of The Weekly with Wendy Mesley.

Wendy Mesley was born on January 8, 1957. Mesley was born and raised-up at Montreal, in Quebec. Wendy was the only child to her parents. She grew up to be very confident and positive. She never comprises anything to accomplish her goals and targets. When she was in secondary school, she did a part-time work at CHUM radio. She further completed her graduation at Ryerson by studying journalism.

Wendy married her co-host Peter Mansbridge who was working for the same channel, CBC. However the relationship didn’t last long, the wedding relationship came to an end in the year 1992.

Later, in a few years, Wendy remarried a marketing executive Liam McQuade, on April 17, 1998. They have a daughter and her name is Kate Rae McQuade.

Wendy Mesley's talents and skills in the investigative field have brought a great twist in her profession and career. In the year 1994, she became the CBC’s parliament correspondent, and also she appeared as the host for Sunday Report. In the year 2002, Wendy served as the co-anchor of Marketplace, and also she was a nominee of the Gemini Award.

Wendy regularly appears in CBC’s consumer investigation marketplace. She often appears in the flagship program, The National that takes place every day in the evening news. Wendy also co-anchored a show “Test the Nation” sharing the stage with Brent Bambury. Later in the year 2001 – 2002, she worked as a co-anchor for the newsmagazine at CBC News including Disclosure with Diana Swain. She formerly anchored a technology and media series titled ‘Undercurrents’ during the year 1994 – 2001.

Wendy has become a popular journalist and fearless woman throwing confident questions that can delicately shatter the opponent. Wendy’s strong presence landed her the position of a regular Sunday anchor on the program. CBC started making preparations for starting a morning talk show that would start to air in 2018 and announced that Mesley would do the hosting for the show.

In 2005, news broke regarding Wendy’s state of health. Her left breast was found with a lump after undergoing a breast cancer diagnosis. At the time Wendy became aware of her situation, she had fears of sharing her cancer story to the media. Wendy’s first impulse was ignoring the issue.

She was occupied by shooting The Greatest Canadian, CBC’s popular series, and thus, considered it a false alarm. Her husband, Liam could not rest until Wendy had sought consultation from a physician about her health. As a result, Wendy went for a mammogram, and later on, an ultrasound. Wendy was also forced to undergo a biopsy. After some days, a call Wendy received informed her of her condition. Being stunned by the call, she immediately went home.

After her diagnosis, Wendy has undergone various treatments including radiation, chemotherapy, and two lumpectomies. Mesley was able to make her way back to the CBC. But even while working full-time, Wendy was under close observation of an oncologist. In addition to that, Wendy follows her prescription of Herceptin, which is an intravenous, anti-cancer drug.

After returning to CBC, Wendy’s documentary was aired that same month. Her documentary is titled Chasing the Cancer Answer. Among the American audience, the documentary is one that was well-received. Since her return, Wesley has offered her audience the best of her, particularly on The National, CBC’s nightly newscast.

FAQ: How old is Wendy Mesley?