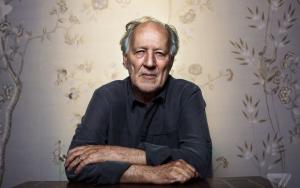 Werner Herzog is a German film director, screenwriter, actor, and author who was born on September 5, 1942, in Munich, Germany to Elizabeth Stipetic and Dietrich Herzog. Shortly after his birth, Herzog's family's home was destroyed during a bombing raid in World War II. Herzog's mother took him to seek refuge in the remote Bavarian village of Sachrang in the Chiemgua Alps. Herzog grew up with little contact to the outside world, no running water, and no flushing toilets or telephones.

He didn't even know what a movie was until a projectionist traveled to the one-room schoolhouse where he was a student. He and his family moved back to Munich when he was 12 and he began aspiring to become a filmmaker. Even though his father abandoned them when he was a child, he took his father's last name "Herzog" because he thought it sounded more like a filmmaker's name. He made his first film in 1961 at the age of 19. He went on to produce, write, and direct over 60 feature and documentary films. Some of his most popular films include "The Wrath of God" in 1972, "Lessons of Darkness" in 1992, "Grizzly Man" in 2005, and "Cave of Forgotten Dreams" in 2010.

FAQ: How old is Werner Herzog?

FAQ: What is Werner Herzog networth in 2020?