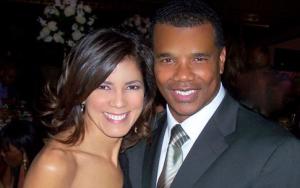 Zoraida Sambolin is known as an American journalist and news anchor. She is most famous for her work at NBC 5 in Chicago.

Zoraida Senoba Sambolin was born on July 10, 1965, in Chicago, Illinois.

Zoraida Sambolin got married to Kenny Williams in 2014. Her husband is the executive vice-president of Major League Baseball team, the Chicago White Sox. They first met each other in the year 2010 at the Salsa and Stars event of Ozzie in Chicago. They started dating after sparks of chemistry flew. Kenny proposed to her in December 2012. Kenny has five children from his earlier marriage and Zoraida has two children from a previous marriage. They have two children of their own named Nicolas and Sofia.

Early in 2013, Zoraida Sambolin revealed that she had breast cancer and underwent a double mastectomy procedure in June 2013. She returned to her work anchoring the show ‘Early Start’ at CNN after a two and a half months leave of absence, which she took to undergo treatment. She revealed that more than the issue of the treatment, the hardest part for her was to reveal it to her children.

Sambolin volunteers for various associations and has a unique enthusiasm for bringing issues to light about breast cancer in underserved communities.

Zoraida Sambolin is an exceptional anchor and producer and has brought in many changes to reporting. Sambolin produced and anchored the show ‘Small Talk for Parents’ at WYCC-TV’s PBC station. She has also anchored the show Nuestros Ninos in the Telemundo affiliate of WSNS-TV for three years from 1999 till 2002. She later shifted to the NBC affiliate in Chicago, WMAQ-TV where she had the role of a freelance news anchor during weekends. She then moved on to WSNS-TV and worked as an anchor and reporter. She became the first on-air broadcaster to work in Spanish and English language stations at the same time. She started the weekly series on health and family called Nuestra Familia at WSNS.

She later moved on to NBC 5 where she was promoted to weekday news anchor. She hosted the program ‘News Today’ along with Rob Elgas. She also anchored the show Un Buen Doctor which is a medical series that appears weekly targeting health problems in Latinos and aired on cable stations globally. She quit WMAQ in 2011 and joined CNN as co-host for the morning program ‘Early Start’ along with Ashleigh Banfield. She has been with CNN since 2011.

While at CNN Sambolin provided various breaking reports including the Colorado Theater shootings, the Boston bombings, and the Cleveland kidnappings. She field-anchored the Newtown Connecticut school slaughter. Sambolin is focused on helping the organization, Autism Speaks bring issues to light about the developing plague of Autism in the country. She has chipped in her time and abilities to the cause. She hosted a Spanish-language DVD that was circulated to pre-teachers across the nation as an instrument to recognize early indications of mental imbalance. She additionally chips in her time for various associations like the Anti-Defamation League.

FAQ: How old is Zoraida Sambolin?