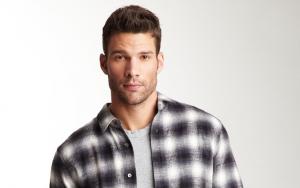 Aaron O'Connell is a prominent American actor and model who played Wyatt Cryer on the OWN series The Haves and Have Nots. He has modeled for Hanes, Ralph Lauren, and Abercrombie & Fitch, among others. Aaron is most famous for his roles in 12 Gifts of Christmas and Prince for Christmas.

Aaron O'Connell was born on April 8, 1986, in Dayton, Ohio. His parents are Mark Alan O'Connell and Kathryn O'Connell. Aaron grew up with three sisters, and he is the only son of his parents. He learned how to play the piano at a very young age from his grandfather Wayne O'Connell. He also grew up playing sports like football in his leisure time.

He spent the better half of his childhood in Carmel, Indiana, and got his schooling from Cathedral High School in Indianapolis, Indiana. He graduated with a bachelor's degree in Health and Fitness from Purdue University's College of Health and Human Sciences.

While attending college at Purdue University's College of Health and Human Sciences, Aaron got his first offer for modeling in Chicago. He managed his modeling engagements as a priority after his college career because he felt that a degree was crucial before starting his modeling career.

His promising acting career started after he was spotted in a commercial for Liquid-Plumber. Though he had done many commercials during his modeling days, this particular commercial helped him get noticed by Tyler Perry. Aaron was then selected for portraying a role in a television series that Tyler Perry produced. When he received the news for the first time, he thought that someone was playing a prank on him, and it took Tyler's intervention to prove to him that it was true. Tyler took Aaron's audition via Skype, and he was the first finalized cast member of the series.

Aaron then went on to act as Wyatt Cryer in the television series The Haves and the Have Nots in 2013, which built the foundation of his acting career and gained him a lot of popularity in the industry. After garnering attention and praise for his portrayal of Wyatt, he was asked to be cast in the movie Prince for Christmas in 2014, where the crew and viewers widely appreciated his acting. In 2015, he got a role in the 12 Gifts of Christmas. He has also be seen in LAID: Life as It Dealt in 2013.

He says that his acting style is inspired by his favorite legends like Paul Newman, Robert Mitchum, Clark Gable, and Montgomery Clift. He thinks appearance is a significant part of a character's portrayal. He works out daily and maintains a balanced diet to maintain his excellent physique.

In 2010, Aaron O'Connell was rumored to be dating AnnaLynne McCord as they were seen holding hands and flirting at a party.

During a Thirst Project Charity event, Aaron O Connell met the love of his life through a mutual friend. In South Africa, they were reconnected by the same buddy. They began dating in Santa Monica shortly after that. The lovey-dovey couple has been inseparable and life partners since that day.

On September 4, 2017, Aaron married supermodel Natalie Pack. Aaron proposed to the lovely lady in the beautiful Bahamas. They were going there for a photoshoot, he explained. Natalie, on the other hand, had no idea that she was in for a pleasant surprise. At some point, all of the friends and families had gathered. As a result, she said yes! Finally, on July 21, 2018, near Lake Como in Italy, the lovely couple walked down the aisle. However, there is no word on whether or not they are expecting a child. However, it is only a matter of time before they welcome someone.

FAQ: How old is Aaron O'Connell?

Quick Facts
Help us Edit this article and get a chance to win a $50 Amazon Gift card.
Last Modified: Jul 27 2021
You may also like
articles you may like