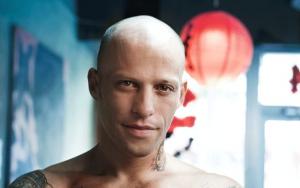 Ami James is known as an Israeli American tattoo artist and reality TV star. He is most famous for his appearances on the reality TV show, Miami Ink.

Ami James was born on April 6, 1972, in Miami, Florida. Ami's father was Jewish, he converted before moving to Israel. Ami grew up in both Egypt and Israel.

Since he was a little child, Ami was suffering from ADHD. That and his father's withdrawal from his life at a very young age were the main reasons that got him involved in art and tattooing. His father was a painter and had tattoos which was something of great interest to Ami when he was a kid.

James didn't move to the United States until the age of eleven where he was living with his grandparents from his father's side. When he was twelve, he finally moved to Miami. He moved back to Israel when he was a teenager and there he became a sniper and got his military service for the Israeli defense forces finished. He got his own tattoo at the age of fifteen. He then decided that he wanted to become a tattoo artist himself.

Ami James got married to Jordon Kidd in 2006. According to a source, he is very difficult to live with because of his temper and he goes home only for his dog. He is now living with his wife, Jordan Kidd with their two daughters. James was previously married to Andrea O'Brian in 2005 but they got divorced a year later in 2006.

In 1992, Ami started his career as a tattoo artist. He first started working at "Tattoos by Lou" with another fellow artist. He moved to Denmark and lived there for a number of months in 1996. He also worked as a tattoo artist in his new country. James and his partner Chris Nunez were both the co-founders of the tattoo parlor "Love Hate tattoos" in Miami, Florida.

He also had some investments with Larry Weymouth, the famous Boston jeweler. Their investment together was a new jewelry line called "Love Hate Choppers". Later in 2011, James started filming his own show "NY Ink". He started filming it in March and it was premiered in June. The setting of the show was "Wooster Street social club" which was one of the nightlife bases of Ami. He also opened a tattoo studio in London, UK, "Love Hate Social Club". He was one of the co-founders of "Tattoodo" which was launched in 2013. It was an online platform for getting different tattoo designs.

James took part in an ad for the campaign "Ink not Mink", where he was working with PETA on this. Ami hs been forever against animal abuse and that is why he teamed up with PETA for their campaign "INK not mink". After that, he teamed with PETA again, where he took part in a behind the scenes ad. He took a photo with his beloved dog Bella and it was to deliver a very important message.

FAQ: How old is Ami James?