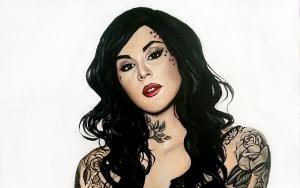 Katherine von Drachenberg, better known as Kat Von D is an American actress, model, musician, TV personality and mostly a well-known tattoo artist. She is known for her appearance in TLC’s LA Ink, a reality TV show that started from 2007 and went on for four seasons, successfully. Her interest towards art and music from an early age was modified when she was influenced by the Latino culture and lifestyle in Los Angeles. With her talent in art, she started to make tattoo designs and at the age of 14 had got her first tattoo. Since then, she knew what she wanted; and that was to become a tattoo artist; and so she quit school at 16 and started out as a tattoo artist. She also believes that her choice in music has inspired her towards her profession, although she a tattoo artist more than a musician.

Kat Von was born on the 8th of March, 1982 in Montemorelos, Nuevo León, Mexico. Born as the eldest of three children; she has got a younger sister as well as a brother. Her parents are father René Drachenberg and mother Silvia Galeano who were both born in Argentina and later moved to Mexico. Her parents moved the family to settle in Colton, California, United States of America when Kat was 4 years of age. She spent a lot of time with her grandmother Clara von Drachenberg, as her parents were out on work mostly. It was her granny who inspired her towards music and art, and she also began to take in piano lessons as a child. A fan of Ludwig van Beethoven, she listens to punk rock and metal music mostly. Born in Mexico, she is an American by nationality and was brought up as a Christian; although she doesn’t follow religion very closely.

Her first work as a professional tattoo artist came forward, after she started to work in a tattoo parlor named 305 Ink in Miami. After the main man of the place, Darren Brass injured his elbow; she got the chance to work as a tattoo artist. That led her to her first TV role, in a reality TV show named Miami Ink, in TLC. She worked for 2 successful seasons in the show, before quitting due to some personal reasons with Ami James. Then, she started her own show LA Ink, which would be filmed in her own shop High Voltage Tattoo. After successful carving 400 tattoos in a single day, she made it to the Guinness World Record of most tattoos given by a single person in 24 hours. She also wrote a book High Voltage Tattoo in 2009, which climbed to the 6th place in that year’s The New York Times Best Seller list. Releasing her second book in 2010, she also launched her own line of cosmetics by the name of Sephora. She even organized a New American Beauty Art Tour, and the money collected went to a charitable society named Art of Elysium.

Having created a successful public image for herself, she enjoys the fame and all the ups and downs that come along. Being a celebrity, it is not unusual that people always come up with good or bad news about you, and her personal life has been a matter of interest to many. With over 1.6 Million followers on her Twitter page, her estimated net worth value in 2015 is 5 million US dollars.