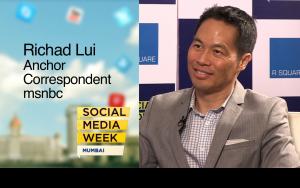 Richard Lui is an American Journalist, columnist as well as a news anchor who is known for hosting shows in MSNBC as well as NBC news. He is known for dealing with humanitarian issues like human trafficking, affordable housing and gender equality among others. He is known for his tie ups with some international organizations and was even appointed as the global ambassador for Plan International USA’s “Because I am a Girl” campaign. He is also the president of one of the largest food suppliers: Food Bank for New York City and is serving as an ambassador for the Epilepsy Foundation.

Born in a Korean family on the November of 1972 in California, USA; Lui is an American citizen. He was raised by his parents as an only child, although not much is known regarding his past life, education or family. He attended a local school, and studied mass communication in City College, before graduating from UCLA in broadcast journalism and sociology. Since 1970s, he started to take an interest in politics and debated in the provocative “Proposition 13” in California. At 19 years of age, he was serving as a campaign manager for Alan Wong, competing for the San Francisco College Board. He also covered political news, mostly during his time at KALX- TV, including the first successful U.S. Senate campaign of Dianne Feinstien as well as Rodney King’s decisions and insurrections. He also travelled to Asia in the mid-2000s, when Indonesia and Malaysia had a heated moment in regional politics. He also contributes to political news in different newspapers like San Francisco Chronicle, NBC Politics, The Seattle Times, Politico etc.

He has also been working hand-in-hand with Polaris Project to eliminate the human trafficking around the world. He has given several presentations and conferences in different offices, schools and universities around the world and has received several awards and titles from many organizations like AAJA and WWAAC. He was also given a chance to display his work on human trafficking at the yearly gathering of attorneys and immigration officers in Atlanta, 2012. As a member of UN foundation, he has travelled widely across Asia, Europe and Africa and has spoken in different programs with some distinct personalities in the world.

He began his journalist career as an intern in several TV channels and news shows before getting his big break in NBC News. After working at NBC for a couple of years, he joined MSNBC in 2010 and since then covered some big events like NATO's attack in Libya, Japanese earthquake and tsunami, Boston Bombings and many others. Besides that, he also covers sports news for NBC and well as MSNBC in their morning shows. Between 2005 and 2009, he worked with CNN and has covered stories like Mumbai train terrorist bombings, 2009 Gaza-Israel War, 2006 Hezbollah-Israel War, Virginia Tech Massacre and some other events around the world. With his continuous and impressive works in the media, he has acquired distinct fame and popularity around the world. He has a wide fan following on his social sites and his biography is searched and read at large on the internet.

FAQ: How old is Richard Lui?