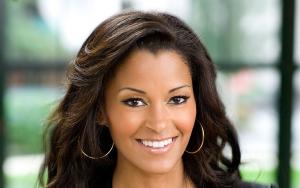 Claudia Jordan is an American media personality, a TV icon, models as well an actress, best known for her role in the show The Price Is Right, as well as a contestant in Celebrity Apprentice where she competed in season 2nd and 6th. She was born on the 12th of April, 1973 in Providence, Rhode Island, USA into a middle class family. She is an American by nationality, but is of mixed ethnicity as her mother is from Italy and her father was an African American. Studying in a local school, she was a very good sports person; particularly running in tracks as she was a very good sprinter. A competitor in the Junior Olympics for three times, she became an All-American sprinter in the 400 meter race. She even won the third price at the East Coast Invitational competition.

An enthusiast in modeling and acting, she won the Miss Rhode Island Teen USA in 1990 as a representative of Rhode Island in the Miss Teen USA race in 1990. She won the Miss Rhode Island USA title in 1997; becoming only the second Afro- American to win that title. In 1997, she became 10th in the Miss USA contest, and later started to work in a local TV show WHDH-TV. Her modeling career came from stage to TV as she appeared in commercials of brands like Coors Light, Visa, Sears, Pepsi and a couple of others. She also acted in musician Joe’s musical video of "I Wanna Know", as well as appeared as a participant in Dog Eat Dog competition. Her fame grew after her appearance on TV as she participated in CBS’s The Price is Right as well as Celebrity Apprentice. She was also selected to compete on the All-Star version of Celebrity Apprentice, but was fired from the show’s 4th episode.

After appearing in a couple of music videos; including “Throw it in the Bag”, also co-hosted the Miss Universe 2009 along with Billy Bush, in Bahamas. On weekends, she started to host the "The Claudia Jordan Show" in radio station, as well as cohosted the "Reach Around Radio" show. She also ran a couple of TV shows, including the Tiny's Tonight show, alongside Tameka Cottle. She was also believed to be joining the cast of The Real Housewives of Atlanta, in its seventh season due 2015. With a lot of TV appearances and some big titles to her name, she has enjoyed success and fame in her career, and has become an international celebrity.

A winner of multiple beauty contests, she is a very attractive woman with appealing qualities and physicality. She is known for her lovely dark eyes, and long black hair along with very decent personality. Known for sense of humor and jolly nature, she is regarded to be a good company to be around with. With a tall and slim figure, she has got very hot physique as has maintained herself through continuous workout and training. You can also find a lot of sexy pictures in bikinis, on the media as well as her Instagram account. With a fan following of about 1.5 million on her Twitter, she has an estimated net worth of 500 thousand US dollars.

FAQ: How old is Claudia Jordan?

FAQ: What is Claudia Jordan networth in 2020?