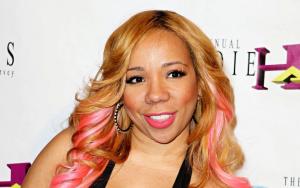 Georgia native Tameka Cottle, who is also known as Tameka "Tiny" Harris,  is best known as a prominent part(lead vocalist/ supporting singer/ co-writer) of multi-plainum R&B quartet Xscape (1991-2001, 2005), which is famous for platinum albums such as Hummin' Commin' at' 'Cha,  Off The Hook and Traces of My Lipstick. Nevertheless,  some people also relate to her as the loving wife of rapper T.I. She is a Grammy winning songwriter( known for penning TLC's hit singles No Scrub) and platinum selling singer herself.

Born on July 14, 1975 in  College Park, Georgia, US, Tameka specializes in R&B, Soul and Hip Hop. Impressively, the American sensation of African American ethnicity has been excelling in singing since her teen days.

Her massive net worth of 3 million US dollars is an understatement to her talents. She joined Xscape while still attending Tri-Cities Performing Arts High Schook at the age of 17. Later,  she and her Xscape fires impressed the producer Jermaine Dupri while performing at a Martin Luther King J.r. Birthday celebration in Atlanta. In return, Dupri wasted no time in singing the group to his new record label.

As of July 22, 2014, the award-winning singer has vowed to make music under her own label called Pretty Hustle. Impressively, her first solo single "What the F**k You Gon Do?" relased under the record label Pretty Hustle earned immense love from her fans to reach the no1 position in the R&B soul chart in less than 24 hours from the release.Last but not the least, she has earned fame as a reality tv star for her appearance on BET's Tiny and Toya.

Talking about her relationship status, she is a married woman. She has been married for a long time now. If you have been living under a rock, Tamera enjoys two sons; 2001 born son King C'Andre and 2004 born son Major Philant, from her near to six years of marriage with rapper T.I. If you believe the tabloids, she started dating the Papertrail rapper/singer from 2001.

Nevertheless, T.I. and Tameka also parents four children from their respective previous marriages. More precisely, Cottle has a 1996 born daughter Zonnique Jailee Pullins from his previous relationship with Zonnie "Zeboe" Pullins. On the other hand, T.I. has three children from his previous relationships.Amazingly, the couple are awaiting their seventh child as of December 25, 2015.

FAQ: How old is Tameka Cottle?

FAQ: What is Tameka Cottle networth in 2020?